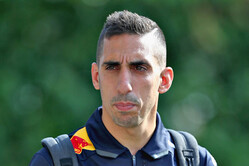 Red Bull has confirmed that Sebastien Buemi will continue to be its reserve driver, his ninth year as a member of the Austrian squad.

A product of the Red Bull Junior Team, Buemi's first stint as a Red Bull test driver came in 2008, a year in which he also raced in GP2, finishing runner-up in the Asia series and sixth overall in the main series, with wins in France and Hungary.

The lessons learned earned him an F1 drive with Toro Rosso for 2009 and at the season-opener he became the first Swiss driver to contest a grand prix since Jean-Denis Deletraz at the 1995 European Grand Prix.

Buemi's time at Toro Rosso came to an end at the close of the 2011 season, but with 55 grands prix under his belt and a wealth of F1 experience at his disposal, the decision to move him to Red Bull in a test and reserve capacity for 2012 was straightforward.

In the years since, he has enjoyed a hugely successful parallel career in other categories. He made his WEC debut with Toyota at the 2012 Le Mans 24-Hour race and in 2014 he and team-mate Anthony Davidson won the WEC title with the Japanese marque.

Buemi repeated the feat in 2018 with a second WEC title, again with Toyota. This time, though, he not only took the overall spoils but also landed his first Le Mans 24 Hours win alongside Nakajima and new team-mate Fernando Alonso.

Alongside his efforts in endurance racing, Buemi has enjoyed a hugely successful career in Formula E. He finished as championship runner-up in his debut season in 2014-2015 and the following year took a memorable championship win at the final round in 2015-2016.

He was again runner-up in 2016-2017 and finished fourth last season. For Season 5 of the electric series he has embarked on a new challenge, driving for the Nissan team which has taken the place of sister company Renault on the grid.