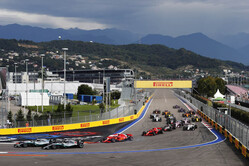 In the eyes of many, since their introduction grid penalties have done more harm than good, a driver taking on a new component through no fault of his own, also taking a penalty that effectively ends his hopes in a race before it has even got underway.

While component changes and misdemeanours have to be 'punished', the sport is aware that the current system is far from perfect, such as the ludicrous situation in Russia whereby five drivers - including both Red Bull drivers - knowing that they had penalties, opted not to run in Q2, thereby making that phase of the session totally redundant. This, following the equally stupid sight of the drivers heading down the pitlane for the start of FP1 ten minutes early as officials sought to determine the order in which their penalties would be applied.

Though the sport's powers-that-be have for years ignored fans calls for less reliance on aerodynamic grip and more reliance on mechanical grip - we won't even touch on the thorny subject of engines or power units - they are seeking assistance with grid penalties.

Using its 'F1 Fan Voice' community, F1 has called on fans to suggest an alternative to the current grid penalty system.

"Research conducted by Formula 1 shows that fans are not satisfied with the existing grid penalties system," reads the survey intro, in a masterpiece of understatement. "Hence, Formula 1 would like to understand your view on some alternative options.

Fans are then advised that while voting for alternatives to grid penalties, the new method must be; simple to understand, a temporary set-back for the driver, must not encourage drivers to avoid running in qualifying and not be financially related.

The alternatives offered - fans are not given the opportunity to provide their own solutions - are:

Removing access to DRS during qualifying, thereby increasing lap time and resulting in a lower grid position due to reduced straight line speed - though if the penalty was incurred during qualifying, it would be applied in qualifying at the next race.

Applying a points deduction, either to the driver or team depending on who was responsible for the infringement.

Reducing free practice time at the next race - though if a driver incurred the penalty during qualifying, it would be implemented at the next race weekend, thereby reducing preparation and set-up time for the race.

Reducing the number of tyre sets available during practice for the race weekend, thereby reducing the ability to understand tyre characteristics.

Adding ballast to the driver's car during qualifying, which, again, would increase lap time, resulting in a lower grid position.

And finally, reducing the amount of permitted wind tunnel testing, thereby impacting aerodynamic development for the rest of the season.

Naturally, the option of allowing drivers (and teams) more engines and components isn't even on the table.

While it's good to see fans offered their say, especially on an issue which causes so much frustration to fans and drivers, the sceptic in us cannot help but recall the words of Mark Twain, in that "if voting made any difference they wouldn't let us do it".