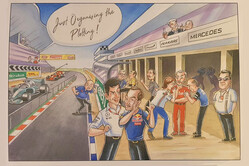 Much like The Queen's Christmas message, Bernie Ecclestone's Christmas card always has a theme.

However, while Her Majesty, who decides on the theme of the message each year and writes most of it, keeps it plain and simple, F1's former ringmaster likes to take a more cryptic approach.

This year is no exception.

2019 is a big year for the sport, and while much of the fan focus will be on the success (or not) of the new regulations aimed to allow cars to follow more closely and thereby increase the chances of overtaking, the real action will be taking place well away from the track.

In terms of the minor stuff Chase Carey and his team have had it easy up until now, but 2019 is when the American must deal with the important stuff.

Having spent two years dismissing Ecclestone's "dictatorial" approach to his management of the sport, Carey is about to discover why such a tough stance was needed.

Getting the teams to agree on a budget cap is one thing - and we'll not concern ourselves with how it might be policed - but levelling out the prize money, actually telling the likes of Ferrari and Mercedes they'll be getting less, quite another. After all, imagine if Carey was told that his salary was to be substantially reduced in order that employees lower down the totem pole could get more.

At the end of 2020, the current Concorde Agreement runs out, and though that might seem a long way away, at present there is no sign of any genuine progress.

Though there is much debate over whether the 2019 aero changes will work or not, the fact is that there must be a new Concorde Agreement.

Like all businesses, shareholders - existing and potential - get jittery when there is talk of problems and upheaval, and the fact that the F1 ($FWONK) share price is at its lowest for the past year, and has lost $1.5bn of its value in the last three months alone, has absolutely nothing to do with those aero regulations.

Over the years, Bernie's Christmas cards have reflected various aspects of the sport, and the Emeritus of the Formula One Group is not above making fun of himself.

While the 2013 card showed Bernie and FIA president Jean Todt walking down the aisle having agreed a new Concorde, the following year the Briton was depicted handing over the $100m relating to his bribery charge.

As the American appeared to wobble as he walked his tightrope across the Atlantic, coffee cup in hand as storm clouds hindered his progress, Bernie strolled his tightrope to the east in bright sunshine. Waiting at the end for Carey was a man with a gun, while Bernie was to be greeted by potential race promoters.

"Chase is trying his best not to fall on his way to find 6 races in the USA," read the message on the front. "Bernie made it with a little help from his friends".

In fact, Chase hasn’t added a single additional race in the United States to the calendar, though he has brought Vietnam on board, a race that Ecclestone actually declined.

This year the message is even more direct.

As Chase, coffee still in hand, chats with Todt above the pits, the American smiling, seemingly without a care in the world. Below, in the pitlane, the team bosses are huddles in little groups, Toto Wolff, Christian Horner and Maurizio Arrivabene in the thick of it - the Italian looking suitably Machiavelli-like.

"Just organising the plotting!" says someone in the stand opposite, while just above sits Bernie, who is watching from the press box.

Perhaps Chase should be taking more notice... perhaps, rather than holding his cup of coffee it is time for him to wake up and actually smell it.