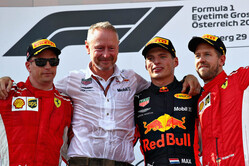 It might be the season of goodwill, but not for Christian Horner, for even as he waits on Santa to being him his shiny new Honda power-units, the Red Bull boss continues to hit out at Renault.

For as long as anyone can remember, Horner, along with Helmut Marko and Max Verstappen, have used every opportunity to stick it to the French manufacturer, criticising it for every single issue yet conveniently omitting to mention it when standing atop the podium - albeit powered by Renault.

In his latest critique of the French manufacturer, Horner sympathises with its employees as he questions the commitment of its top bosses to its Formula One programme.

"Credit where credit is due, In Mexico we were provided with an engine that was capable of winning, as we were in Austria and China," he tells Motorsport.com. "We were lucky in Monaco, even without an MGU-K. Any other circuit and we would have been stuffed.

"I have total admiration for the Renault guys in the garage that are working their socks off, week in, week out," he adds. "But I think they've ultimately been let down by the main house's lack of commitment to development and reliability.

The Briton also cites the decision to use Exxon fuels in its power-units, unlike the works Renault teams and McLaren, as paying dividends.

"Exxon has done a very good job for us," he said. "Their difficulty and frustration has also been that as a customer we get very limited dyno time. But they were able to come up with a fuel that made the C-spec work, and we've managed to get that in the car and run that successfully, when the works team haven't been able to do that. So that's also been encouraging."