Sainz: It's a dream come true 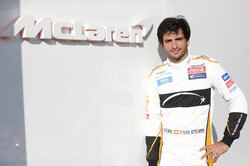 Other than having been a massive fan of Fernando Alonso, Carlos Sainz has also been a long-time fan of McLaren. This week, the Spaniard, made his debut for the Woking outfit, driving the car vacated by his hero countryman. Days earlier

"Honestly, driving for McLaren is kind of a dream come true," beams the youngster. "Everything felt at home, since the moment I jumped in, everything felt really, really good. It has been a great few days and thanks to the mechanics and engineers who made me feel like I'm at home.

"I've met a lot of people with English names..." he says, referring to members of the crew, "many Wills, James, Toms!

"Relationship building is a process that I aim to continue improving throughout the winter, and when I go to Barcelona pre-season testing next year it will be even better."

The two-day test in Abu Dhabi gave Carlos the opportunity to meet up with his new teammate, Lando Norris.

"Seeing him drive on day one of the test helped me to see how the team was operating," he says. "Then it was my turn, and we have already shared a couple of comments about the car, about the balance, about what we need for next year. It's going smoothly so far."

Of course, other than Alonso, many other F1 legends have driven for the Woking team, men such as Senna, Prost, Hakkinen...

"Incredible... that's why when I left the garage for the first time in the MCL33, it was a good moment. I realised I was driving a McLaren and for this team, and that is something special."

Asked about his plans for the coming weeks and his preparations for the off-season, he replies: "It's going to be a few weeks away still. I'm going to the McLaren Technology Centre to prepare for 2019. l'll be going home in mid-December to get a bit of a break over Christmas and New Year's Eve.

"Until then, still a bit of hard work to do, but we'll have some fun at the factory too. We're planning on doing some go-karting races with the mechanics and staff to get to know each other. It'll be a fun few days - but still working and pushing hard.

"As you get more experienced, you know where your weaknesses are, where your strong points are, and you keep improving and keep getting better at preparing yourself," he says of his 2019 preparations. "So, I'm planning on doing pretty much the same as always."