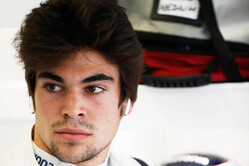 Paddy Lowe, Chief Technical Officer: It's great to be back in Abu Dhabi and to be reaching the end of a very long season. Practice in Abu Dhabi is tricky because FP1 is in very hot, sunny conditions at 1pm whereas FP2 in the evening is far more representative of qualifying and the race. As usual, we did a lot of experimental work in FP1 with both Robert and Lance. Robert was in the car for his third FP1 of the season, which was planned from the outset, but is clearly beneficial given his confirmed drive for next year. Our performance in FP1 was unfortunately better than it ended up in FP2, which is the one that matters more. We have a lot of homework to do tonight to understand that issue and to be stronger for qualifying tomorrow.

Lance Stroll: We have nothing too different this weekend and we are still more or less in the same positions. We will see what tomorrow brings and we will try and break it down tonight and look for some more lap time. I don't want to come to conclusions today, as tomorrow is a new day, anything is possible in qualifying and maybe there will be a surprise or two. It is great to be here in Abu Dhabi, I enjoy the track, which is unique, the infrastructure is great, it is a great destination to wrap up the season and it is certainly a party scene.

Sergey Sirotkin: It was a tough session, probably the most difficult FP2 in the season. It is a demanding track for the tyre and it's difficult to put the car balance all together throughout the lap. We must analyse the data tonight, so we have a lot of work to do. Tomorrow is a new day, it's the last race and I am looking forward to it.

Robert Kubica: We completed a productive FP1. The programme was orientated at evaluating next year and we collected some valuable data during the session. It was not easy as I hadn't driven the car for nearly four months but from a test point of view it was good. I am looking forward to Tuesday and Wednesday as it'll be an important test for everybody. It will be nice to be back in the car and working towards the goal of Australia.