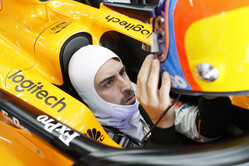 Lando was once again in the cockpit of Fernando's car in FP1, where he spent time getting to know the Interlagos circuit and dialling in the car for the weekend ahead. His session ran smoothly and he finished in 16th position.

Fernando got back behind the wheel for FP2, continuing Lando's aero and tyre evaluation work from the morning session. He completed his scheduled programme successfully and set the 13th fastest time in FP2.

Stoffel had a couple of small issues in both sessions that cut short his running slightly, and which the team is still investigating. Nevertheless, he managed to conduct a number of useful evaluations that will be analysed in preparation for next season. He finished in 19th position in FP1 and 17th in FP2.

Fernando Alonso: "It was a positive Friday. I missed FP1 and testing one tyre compound, but we still managed to get all the information we needed and do all the tests we wanted anyway, as we had a clean second session, only slightly disrupted by the red flag. We now need to analyse everything and we'll hopefully be more competitive tomorrow.

"As always on this track, one or two tenths can mean five or six positions, so we need to find the right tuning on the set-up tonight and meet perfection on our lap tomorrow. There is a lot of work to do, but I am quite confident."

Stoffel Vandoorne: "It's not been the ideal Friday for us. We had a couple of issues in FP1 and FP2 which cut our day a little bit short, so we've not had quite the running we wanted. We did a lot of testing and preparation for next year in FP1, so it's not the kind of preparation you want to go into the weekend, but that's the way it is sometimes.

"Hopefully tomorrow everything will be sorted out and we can start to build on a proper weekend. The field here is always super tight, so it's important to really extract every tenth you have in the car. We'll aim to do that tomorrow in qualifying to try and get the maximum there.

"The weather looks a bit unsettled for Sunday as well - hopefully that can play to our advantage. If the conditions are difficult and tyre degradation is hard, then I think there's always a good opportunity for us.

"Hopefully tomorrow will be better and we can go into qualifying with a bit more preparation, and then we'll see where we end up."

Lando Norris: "Today was definitely a more productive day than my last visit to Interlagos! It's a new track again for me and I was trying to get into the rhythm of the circuit. I got up to pace pretty quickly. I did the tests I needed to do for both my side and the team's side, and I did some practice starts, so it was a good session.

"During FP2 I try to learn as much as I can in the garage. It's not just about watching and listening to what the engineers and drivers are saying and going through the data, there are a lot of interesting things that go on in the background that people don't hear.

"I like going through the data to see what's good and what's bad, and comparing some things to my run this morning. Even though the conditions changed slightly and we were on different tyres, there are still things that I like to compare. Whatever I can learn is a good thing.

"You can learn a lot from just one session on track, even if by the end of FP1 I didn't manage to try everything I wanted - different lines or braking points, for example - because of the amount of time I had. But by already doing what I did, I can come back next year knowing a lot more and can try those things straight away.

"I can watch Fernando and Stoffel and see what they do, but by doing FP1 on a weekend like I am now and then going into FP1 next season is a big help and I think it prepares you a lot more. I can go straight into knowing what's good and what's bad next year, without it taking me a whole session to build up to things.

"Interlagos is quite tricky and it's easy to lock the tyres in Turns Eight, Nine and Ten. It's quite tough and I don't think it'll be the easiest track to overtake on. But it's a good track and pretty fun and enjoyable to drive."

Gil de Ferran, Sporting Director: "We're generally satisfied with the running today. Unfortunately, we had a couple of issues on Stoffel's car that curtailed track time in both FP1 and FP2.

"On the positive side, we made consistent progress throughout the day on the balance of the car and were able to perform all the tests that were scheduled.

"Overall, we seem to be in a reasonable position. Looking ahead to tomorrow, there are still some doubts over weather stability, however we also expect temperatures to rise throughout the weekend, which will play an important part in our decision-making."