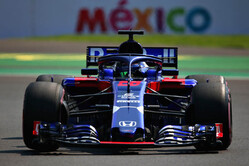 Brendon Hartley: "It was a really positive Friday for us. To be in the top 10 in both sessions and to finish P6 this afternoon was great! I enjoy coming to this track, I've raced here a few times before and it's my second visit in a Formula 1 car. We did a lot of testing on the new aero kit. I really think it suits my driving style so today it felt like we started getting the car closer and closer to what I want. It's great to come out punching after a few really good races for me, and I'm feeling good about the weekend so far."

Pierre Gasly: "Today wasn't an easy day. The engine change in FP1 meant I couldn't run much in the morning, which affected the preparation for this afternoon's session. As for FP2, it wasn't a very clean session due to the traffic and a few drivability issues, so we have quite a lot to do tonight to get ready for tomorrow. Due to the penalty on Sunday, we will have to start from the back of the grid, so our main focus will be on the race pace. I'm still positive though, because even if it makes my life more difficult here, it's a strategic move for the remaining two races of the season."

Jonathan Eddolls (Chief Race Engineer): "We travelled to Mexico expecting poor weather, but we've had a fantastic sunny day and we've managed to get a lot of track time on one of the cars. Both cars had very different programmes which we planned coming into the weekend; we took a tactical PU change for Pierre, which meant he only got a couple of installation laps in FP1. We then fitted a PU that was already in the pool for FP2 onwards. The main focus for us as a team today was to understand the brakes, the cooling, and in particular, the tyres and the new aero package. They're the key items here because this track is extremely difficult on the brakes and cooling. They both seem to be under control which is positive. We also evaluated the aero package and gathered data with the rake in FP1, which looks good. We were playing with the setup on Brendon's car throughout FP1 and into FP2, to try to learn and optimise the aero platform after the limited running in USA, and maximise the performance of the new package. You can see from the timesheets that it appears to be working well, but we still need to go through all of the data tonight and confirm that. We have very big tyre graining here. We expected some, but not as much as we've seen today. Since the Hypersoft grained so much, it didn't give Pierre the chance to get a lot of timed laps in, so I think his position on the timesheet is not representative of where he can be. The key for us now is to see what we can do to mitigate the graining for Sunday or adapt the strategy around it."

Toyoharu Tanabe (Honda F1 Technical Director): "As planned, we sent Pierre out in FP1 with a new latest spec PU for a couple of installation laps and then immediately brought him in to replace that PU with a pre-Russia spec version. Brendon was already running this specification since the start of FP1. We have thus put another new engine in Pierre's pool for the remaining two races. Brendon's sixth place this afternoon was certainly encouraging, while Pierre had to deal with missing the first session. We therefore had plenty of work to get through today and everything went smoothly."