Gasly: Vettel "over performed" at start of season 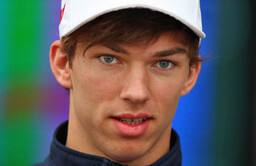 Invited by The Sun (natch), to heap further pain on Sebastian Vettel following another costly mistake in last week's United States Grand Prix, Pierre Gasly took a unique approach, suggesting that the German "over performed" earlier in the season.

Asked about the mistakes, which have left the German trailing Lewis Hamilton by 70 points, having led the championship in the early stages of the year, Gasly told reporters: "I think it's part of racing... you're always driving at the limit.

"I think he probably over-performed with the car he had at the beginning of the season," he continued. "A couple of times he managed to win races which probably they probably didn't have the potential to win and then of course, expectations were really high.

"He did a couple of mistakes in the second part of the season," he added. "I think he's the only one who could answer why.

"When you're fighting for the championship, you're so much on the limit all the time, trying to achieve things, was probably not achievable with the car he had a couple of times and then things happen.

"He's a four time World Champion, I think he knows how to manage a championship. It's not the first time he's in this position but he's the only one who could answer that question."

"It's always difficult to judge the performance of any other driver and car because you don't know what they are going through," said Carlos Sainz. "Of course, there have been some mistakes that we've all seen but I think it's very easy to judge it from the outside and not know what is clearly going on in there.

"I think Sebastian is a fantastic driver," said Sergio Perez. "It's very hard to judge the performance of someone when you're not in the team and you don't know exactly what's going on. So it makes no sense for me to say.

"Obviously we have seen some mistakes," he admitted. "Probably at the end he was just desperate, trying to achieve what was probably not possible but he's a four time World Champion for that reason so he has a great team and he will be back to fight again and he has a great opportunity to fight Lewis. Mercedes also have a fantastic car so it was very hard for him.

"The first thing is that sometimes it happens and he pushes and pushes and sometimes he gets it wrong and unfortunately it happened to him a few times," said Vettel's Ferrari teammate, Kimi Raikkonen. "I think we've all gone through it, it's part of the game.

"I can only look at myself," he said. "I think it makes no sense to comment on another driver so I don't want to piss anyone off."