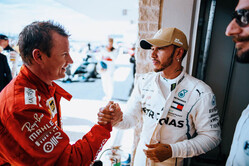 Lewis came home in P3, racing to the 15th podium at a US Grand Prix for Mercedes-Benz Power. Valtteri finished today's race in P5, securing ten points for the Constructors' Championship.

Lewis (346 points) leads the Drivers' Championship by 70 points from Sebastian Vettel (276 points) with Valtteri (217 points) in P4 and with 75 points left to be scored in the season.

Mercedes-AMG Petronas Motorsport (563 points) lead Ferrari (497 points) by 66 points in the Constructors' Championship with 129 points remaining to be scored in the 2018 season.

Lewis Hamilton: It was actually a really fun race, to be close with Kimi and have a bit of a battle with him and Max. It was quite cool that it was Ferrari, Red Bull and us battling for positions and it must have been exciting to watch. Naturally, I'm a bit disappointed in our performance, to have started first but finished third, but I'm still grateful that I managed to finish up ahead of Seb. When you don't have Friday practice you don't get to work on the set-up and get the optimum out of the car. Everyone was in the same boat, but I think ultimately Ferrari came closer to us with the changes they made. In the race, we were lacking pace on the straights, but I gave it everything. I was still pushing like crazy and that's what racing is all about. I had one little chance at the end, but I had to give Max a lot of space because it's better to finish third than get taken out by someone who's not fighting for the championship, so I didn't want to take that risk. We were going for the win today, but it wasn't meant to be. We're going to Mexico next; it's such a beautiful place, but I haven't always had the best results there, so I definitely want to win that race.

Valtteri Bottas: We knew going into the race that it was going to be a difficult afternoon. The Ferrari looked very quick yesterday and there were a lot of question marks because of the limited running in the dry, so making predictions on the set-up and the tyres was very tricky. We didn't quite have the pace that we were hoping for, especially on the Soft tyres. We had planned for a one-stop race and that's what we did, but in hindsight the second stint was just a little bit too long. My tyres started to go three or four laps before the Sebastian overtook me and they were just completely gone in the end, that's why he managed to build such a big gap in only a few laps. But we couldn't work the two-stop work with Lewis either, so overall we were just lacking pace today. We will now do our usual work of analysing and understanding why we weren't quicker today, so we can come back stronger and hopefully win in Mexico. There's only three more races left in the season and the fight is far from over, so we will give it everything to get the best results possible.

Toto Wolff: First of all, congratulations to Kimi on his win today - it has been a long time since we saw him on the top step and it was great for Formula One to have him up there. This was a day of fantastic racing, and a great show for the American fans with lots of wheel-to-wheel battles, but it wasn't a good day for us at Mercedes. All week, we have heard people talking us up, talking Ferrari down and talking as if this season is a foregone conclusion; but that narrative doesn't fit the reality of Formula One. We have been wary and respectful of Ferrari at every race this year and we knew they would come here to fight back hard - and so they did. It wasn't a surprise against competitors of such strength. On our side, the story of the race wasn't really one of strategy; we didn't have the balance of speed and tyre management that we would have needed to win this afternoon. When we were running second with Lewis and the VSC came out, we took the opportunity to off-set ourselves in order to go for the win - because it was going to be very tough to win by mirroring Kimi ahead. This looked pretty good for a while but we knew it would mean coming back through other cars in the final laps - and it didn't work out. He managed to close the gap but we gave him too big a mountain to climb, and the tyres no longer had the pace advantage he needed to pass in the final laps, in spite of giving it a pretty spectacular go against Max. For Valtteri, though, we tried a one-stop strategy like the top two - and couldn't make the tyres last either. So we need to learn the lessons from today, take strength from the pain of having been out-performed here and move on to Mexico determined to get closer to our potential in terms of the race performance. Nothing can, and nothing will, be taken for granted by any single member of the team.

James Allison: That wasn't the race we were hoping for, but I guess we always knew that we might face a tricky time at the start with Kimi on the softer compound and with a strong run up the hill as a result. However, we did think that we would have the pace one way or another to impose ourselves on the race. It didn't work out that way. The absolute pace of the car remained strong, but we consumed our tyres quicker than the others and that left us with a weak hand to play over the distance of the race. You could see that both in the two-stop that Lewis did, aided by a Virtual Safety Car, and in the one-stop that we chose for Valtteri; both drivers started brightly enough in their stints but their challenge faded as the tyres went off. We normally get the car in a happier place than this, but with Friday being washed out we were blind to the problems we experienced today. They were cruelly exposed today and they led to the disappointing outcome. We look forward to Mexico next weekend, and we are determined to put on a better performance than we managed today.