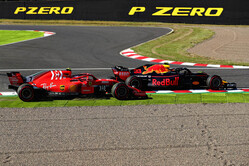 While Max Verstappen - not for the first time - believes the stewards got it wrong, and that the time penalty meted out to him for the first lap incident with Kimi Raikkonen was not justified - the Red Bull driver suggesting the Finn was responsible - the FIA's race director, Charlie Whiting disagrees.

"It was quite clearly a penalty because Max went off the track and rejoined the track unsafely," said Whiting in a post-race media debrief.

"You are required to rejoin safely," he continued, "and Kimi was there and he pushed him off the track. So I think that was a fairly straightforward one for the stewards."

Asked about the subsequent clash with Sebastian Vettel, the Briton agreed that it was a racing incident with neither driver fully to blame.

"Seb tried to get up the inside, and it was a reasonable move," he explained. "He got halfway alongside and Max turned in... a bit of a classic really.

When it was put to Whiting that in China Verstappen was penalised for such a move on Vettel, the Dutchman having earlier compared the two incidents, he replied: "In China he came charging down the inside into the hairpin, and almost T-boned Seb, I don't think there was any similarity between the two.

"I haven't had a look at the one from China," he admitted, "but my recollection from that incident as it was a very clear case of causing a collision, and I think what Sebastian was doing was a genuine attempt to overtake. What Max was doing in China was opportunistic at best."