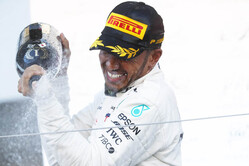 Lewis Hamilton led a Mercedes one-two, stopping just once without losing the lead. Both Mercedes adopted the same soft-medium strategy, but behind them there were some different one-stop strategies that completed the top five.

The exception was Red Bull's Daniel Ricciardo, who finished fourth using the same soft-medium strategy as the top two, having started 15th due to a problem in qualifying.

Another driver to show plenty of pace was Ferrari's Sebastian Vettel, finishing sixth with a supersoft-soft strategy after dropping towards the back following a racing incident.

With temperatures and energy loads high at the Suzuka circuit, in contrast to the variable weather seen up to today, there were a number of question marks about strategy before the race start. Nonetheless, the majority of drivers were able to stop only once: helped additionally by an early safety car.

Pirelli now remains in Suzuka for a two-day development test with Renault, assessing 2019 prototype tyres on Tuesday and Wednesday.

Mario Isola: "With temperatures being so much warmer than they have been up to now, we knew that there would be some additional challenges at this very demanding track. This was indeed the case, especially in the closing stages of the race, but it did not compromise the action at all, as the many impressive fightbacks showed. Thanks also to an early safety car most drivers were able to make just one stop, and we also saw some very long stints on all three compounds. Many chose to finish the grand prix on the medium - the equivalent of last year's soft - despite the fact that this tyre wasn't used extensively in free practice, and not at all in these warm conditions."