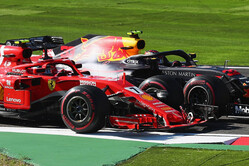 It's fair to say that Max Verstappen's 2018 Japanese Grand Prix was incident filled, the 21-year-old finishing third despite two clashes with the Ferrari drivers, one of them resulting in a 5s time penalty.

Referring to the first lap clash with Kimi Raikkonen, which saw the pair touch - forcing the Finn off track - as the Red Bull driver recovered after locking up at the final chicane and cutting across the grass, subsequently being handed the time penalty, Verstappen said: "I locked up, I could easily have cut the track, I made my best effort to get back on track. He chose to go around the outside.

"He could have waited for me to understeer wide," he added. "So I don't know why I got a penalty. It is a bit stupid."

Unhappy at the penalty, he pointed to an incident late in the race as he shadowed Valtteri Bottas, who also cut across the chicane after locking-up.

"If I get a five-second penalty for that, then next time I'll just cut the track and do it like Valtteri," he said. "I was just trying my very best to still make the corner and not make it look like I'd locked up and just cut the corner. But I know what to do next time now."

Though no further action was taken regarding the clash with Sebastian Vettel at Spoon, Verstappen was adamant.

"In that corner you cannot overtake," he said. "I even gave him space. But he understeered into my car."

Asked whether he felt the German should have been penalised, the youngster compared the move to that which earned him a penalty in China.

"I'm not the one who makes the rules otherwise a lot of penalties would have been avoided in F1," he said, "but I think it is a similar scenario to what I had in China with him. Of course we didn't spin off the track, but he drove into the side of my car. He could have been a bit more careful."