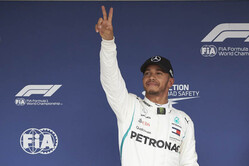 Lewis claimed his 80th Formula One pole position - his eighth of the 2018 season and second at the Suzuka International Racing Circuit. Valtteri will start tomorrow's race from P2 - his best-ever starting position in Japan. Today's result marks the 175th front row place for Mercedes-AMG Petronas Motorsport in Formula One.

Lewis Hamilton: The session started out ok, but then you look out the garage and you see it's raining, spitting, that it's very humid, I saw a couple of cars spin. It was very difficult to know whether the track was going to be dry or whether it was going to be wet. We obviously had not done any practice in the wet and it looked like it was going to be wet in Q3. We were waiting in the garage for someone else to go out first. I think we made the right decisions as a team today. It's been a bit of an anti-climax because we couldn't do that second lap. Today, they did such a great job in terms of the timings, there were no mistakes made even though there was a lot of pressure as there always is in Qualifying, yet still everyone was cool, calm and collected and did the job collectively as a team. It's really an amazing journey to be on with this team and I don't think 80 pole positions is the end - but it's a milestone and I'm very proud. The last six years with this team have been incredible and I'm so proud of everyone and so grateful for everyone's hard work which has enabled me to go out and exploit my own abilities.

Valtteri Bottas: First of all I want to say congratulations to Lewis - 80 pole positions, that's a big number and he deserves a lot of respect for that. The cars have been so quick today as they have been all weekend and it was enjoyable to drive in Qualifying. I struggled a lot in FP3, the car didn't feel stable at all and I was struggling to find confidence. It got better in Qualifying and by Q2 it felt pretty good. Everything came down to one lap in Q3, I missed a little bit in sector 2 and 3, but I enjoyed it. Everyone in our team should be really proud of what we achieved today, of the car that we have and of how the team worked today - every single decision was right, everyone was calm. It might have looked like a hectic session from the outside, but inside the team everything was so calm, we just stuck to our plan and made the right choices which ultimately produced this result.

Toto Wolff: That was an intense qualifying session and, in the end, Q3 ran pretty smooth for us - and we probably got a little slice of good fortune, too. The drivers did the job when they had to, on that first run in Q3, and found the right balance between aggression and caution in tricky, greasy conditions. But today the plaudits go most of all to the team on the pit wall, in the garage and in our race support facilities in Brackley and Brixworth; on days like this, we always say it is much easier to get things wrong than right, and today we made the correct calls in the correct moments. However, the excitement at the result fades very quickly into focus on the race. Conditions are expected to be much warmer and we saw in Sochi that the competitive picture shifted significantly between Saturday and Sunday. So we will stay sceptical, keep our feet on the ground and prepare solidly for all the challenges that we will face tomorrow. The racing happens on Sunday, and that's the bit we need to get right. But today was a good first step in that direction.

Andrew Shovlin: We're absolutely delighted with the front row today, the car has been working well all weekend but strong winds and unpredictable rain made it a whole lot more difficult. The first session was fairly straight forward and we were able to get a good lap in with both drivers before the red flag. In the second session we ran as planned on the Soft tyre, having seen the compound work well yesterday. We were a bit surprised to see both Red Bull and Ferrari take the SuperSoft and were discussing whether we should cover it although a shower near the end of the session meant the track would not be quick enough which ended that particular conversation. Qualifying three was always going to be a bit of a gamble as it started with light rain and the radar was showing heavier rain towards the end of the session. We decided to go on the SuperSoft and both drivers did a great job getting good times on the board in tricky conditions. We came into the pits and took a second set with both cars but by then the heavier rain had started to fall and it was clear we were not going to be able to go quicker. We're expecting a hot and sunny day tomorrow which will make life tough on the tyres so it should be an interesting race from that point of view as no one knows quite how they are going to behave.