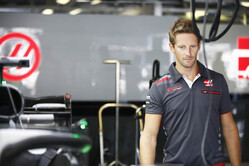 Though the last couple of weeks have seen two potential Haas drivers - Charles Leclerc and Antonio Giovinazzi - snapped up by rival outfits, it remains to be seen whether Romain Grosjean and Kevin Magnussen will be retained by the American team.

The pair have had topsy-turvy seasons, The Dane strong in the early stages at a time his French teammate was clearly struggling, while as Grosjean has improved in recent races, so Ericsson's form has clearly dipped.

Though the team is expected to announce its line-up over the Austin weekend, speaking in Sochi today, team boss Guenther Steiner was giving little away, certainly in terms of Grosjean who is only a few penalty points away from the second race ban of his F1 career.

"Since he found the key, as he says, and he didn't lose it again, I think he's performing pretty well," said the Italian. "He's back to what he was before, before he had that dip in performance at the beginning of the season.

"He was here from the beginning," he continued. "He did take a risk for his career to come to us, because he didn't know us, but I think our relationship is very good.

"If you think about it, we are in our third year and we're fighting for fourth position. What more can you expect? Whatever happens in the future, the relationship will stay positive. There will be no fights."