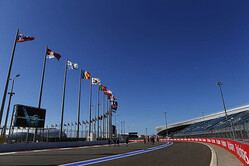 Ahead of this weekend's Russian Grand Prix, only a few minor changes have been made to the Sochi Autodrom since last year's race.

The Autodrom may resemble a street track in look, with two long straights and one high speed turn top speed (without DRS) is around 213 mph (343 km/h), while the average speed is over 125 mph (200 km/h).

Approximately 60% of the lap is spent at wide open throttle, well above the 'traditional' street average. The lap opens with a short burst of wide open throttle, the pit straight blending into Turn 2, thereby giving a total full throttle time of 15 seconds. There is only one other sustained period of wide open throttle around the lap, the curve from Turn 10 to 13 at the back of the track. This is around 950m long and 13s duration.

Sector two is very point and squirt, with right-angled turns that give the MGU-K plenty of chance to recover energy. Turns 2 and 4 are the hardest stops and the car speed drops to 75 mph (120km/h), with each braking event around 2.0 seconds.

The radial Turn 3 that rounds the Olympic arena is taken at full throttle. This sustained throttle use will give the MGU-H a steady stream of exhaust from which it can recover the lost heat energy.

In terms of tyres, the hypersoft is available in combination with the ultrasoft and soft. This is the same nomination as Singapore, with a 'step' between the compounds, with the supersoft is missed out.

This should again have the effect of opening up the strategy possibilities by ensuring quite a wide but equally spaced performance gap between the compounds. However, with Russia being a very different type of track to Singapore, there will be many unpredictable elements still to discover from the weekend.

The Sochi circuit was well-known for being very smooth and slippery when it made its debut in 2014, but since then the asphalt has matured - albeit not quite as much as expected, due to the extremes of temperature between summer and winter. This year, the race returns to an autumn date, as it was up until 2016.

Wear and degradation levels are generally low, but the hypersoft is effectively two steps softer than the softest compound brought to Russia last year: the 2017 ultrasoft.

Last year's winning strategy was a one-stopper, Valtteri Bottas taking his first-ever F1 win by going from the ultrasoft to the supersoft on lap 27.

The most demanding corner, which takes the most out of the tyres, is Turn 3: a multi-apex left-hander.

The front-right tyre works hardest over the course of the 3.633 mile (5.848-km) lap, which puts the emphasis on traction and braking.

Mercedes have a clean sweep of victories - albeit with three different drivers, Lewis Hamilton winning the race in 2014 and 2015, Nico Rosberg in 2016 and Bottas last year.

Mercedes have also taken three of the four pole positions to date. Hamilton was on pole for the inaugural event in 2014, and Rosberg had back-to-back poles in 2015 and 2016. Sebastian Vettel broke the chain last year, starting from P1 for Ferrari. The race was won from pole position in 2014 and 2016, from second in 2015 and from third on the grid in 2017.

Mercedes have taken half the podium spots available at this race. In addition to their four wins, the Brackley-based team took second place in 2014 with Rosberg and 2016 with Hamilton. Ferrari have four podiums, with Vettel second in 2015 and 2017, and Raikkonen third in 2016 and 2017. The two other podiums have both gone to Mercedes-powered teams: Williams took third place in 2014 with Bottas, while Force India was third in 2015 courtesy of Sergio Perez. Hamilton's second place in 2016 came from P10 on the grid - the furthest back from which a driver finishing on the podium has started.

Nine of the current field have contested every Russian Grand Prix: they are Bottas; Marcus Ericsson; Romain Grosjean; Hamilton; Nico Hülkenberg; Perez; Raikkonen; Daniel Ricciardo and Vettel. Of these, Hamilton, Raikkonen and Perez are the only drivers to score in every race
and Ericsson is the only one not to score at any. Fernando Alonso has qualified for each race but retired on the formation lap last year with an ERS failure.

Underlining the reputation of the Russian Grand Prix as a one-stop race, only four from 40 points scorers have done so making two stops, and no two-stopper has finished higher than fifth.

Of the four drivers starting their first F1 race at the Sochi Autodrom this weekend, Sergey Sirotkin is the most familiar with the circuit. The Russian has been a test driver in Friday practice three times, appearing for Sauber in 2014 and Renault in 2016 and 2017 - albeit failing to set a time last year. He has also raced here in GP2, in 2015, finishing fourth in the feature race. Pierre Gasly raced in GP2 in 2014 and 2015, finishing second in 2015. Brendon Hartley and Charles Leclerc are making their Sochi debuts.