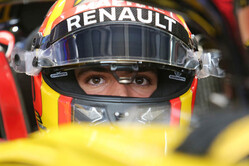 Carlos Sainz warns Renault not to discount a challenge from Racing Point Force India for fourth in the team standings.

While the team lost ground in Singapore courtesy of the overenthusiasm of its drivers, few would bet against it taking points in all the remaining races.

While Renault currently has a 59-point advantage over the Silverstone-based outfit, Carlos Sainz warns that the French team cannot ignore the threat.

With funding finally available, Force India has been able to begin introducing its long-awaited updates, while Renault, though also continuing to update its car - admittedly with less impact - is focussing on 2019.

Such is the frantic competition in the midfield as Renault battles with Haas, McLaren and now Racing Point for 'best of the rest', the American outfit has cited the situation as the driving force behind the French team's protest of its floor... just hours after it inherited fourth in the standings following Romain Grosjean's drive to sixth in Italy.

"Our target was to finish fourth in the constructors' and if it was not for the penalty they suffered they would be ahead of us by pure performance," admits Carlos Sainz, according to Motorsport.com.

"We need to be very careful with Force India," he adds. "We know that in the second half of the season they always start to come alive and they've proved it once more, once they've got a bit of money and everything. A track like Singapore where we expected to be ahead, we're behind.

"We know our car is strong in low-speed corners," says the Spaniard. "We generate quite a lot of grip and load in low-speed, but we know our ride through kerbs and bumps is not where it should be compared with other teams. We keep working on it but it's probably still our main point.

"A big part of it is also the engine, we're stuck with the B-spec and the others have brought massive steps during the year which we haven't been able to bring.

"We're going to make sure we give everything to hold onto that P4. It's going to be a tough second half of the season."

"We have floor updates for Sochi," confirms chassis boss Nick Chester, "an evolution from the update we saw in Spa, and this should give us a small gain.

"We ran updated bargeboards and sidepod vanes in Singapore and they behaved as expected, so we will use these again in Russia."

Of course, other than professional pride, fourth in the standings not only means more prize money but a seat on the Strategy Group.