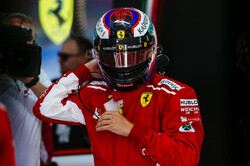 Daniel Ricciardo led a Red Bull 1-2 in the opening session, with the Ferrari duo third and fourth. Next up was Nico Hulkenberg, as the Renault duo sandwiched world championship leader Lewis Hamilton.

Along with the Panthers, the Mercedes duo opted not to run the hypersofts, meaning that we don't yet have a clue as to the pecking order.

That said, other than the conditions in FP1 being unrepresentative of the rest of the weekend, we know that the softest compound and indeed this track don't always suit the Silver Arrows. Then again, the ultrasoft may well prove to be the go-to tyre, which would be bad news for Ferrari which has thrown in its lots with the pink-banded rubber.

As ever there were a number of offs and near misses, with Valtteri Bottas having three such moments, however, it was Charles Leclerc's late encounter with the barriers as he exited the bridge that grabbed the headlines, the youngster - newly announced at Ferrari for 2019 - apologising for his mistake.

Understandably, with the sun going down this session got underway in cooler conditions, the air temperature now at 30 degrees C and track temperature at 35.4 degrees.

Courtesy of some sterling work by the Sauber crew, as the session got underway, Leclerc was in his car ready to get to work.

Unusually, Bottas was among the first out, Mercedes possibly having made some changes following his numerous incidents earlier.

While Messrs Alonso and Raikkonen usually provide the radio entertainment, one couldn't help but smile when Leclerc's engineer had to repeat a setting instruction three or four times before the youngster finally understood.

During a flurry of activity around ten minutes into the session, as the times tumbled, Hamilton had to take to the escape road at T14 following a misunderstanding with Vettel, the Briton doing his tyre no favours. "My tyres are really damaged," confirmed the Briton shortly after.

Though late to join the party, Ricciardo was soon on the pace, and just seventeen minutes into the session it was 'business as usual' as far as the 'big three' were concerned.

Around half-an-hour into the session, Hulkenberg and Bottas were the first to fit the hypersofts as the qualifying sims got underway.

Shortly after, teammate Hamilton bolted on the pink-banded tyres and improved from 1:40.964 to 1:38.710, an improvement of over 2s. Similarly however, Raikkonen also improves by around 2.1s

By the time the Bulls began their hyper runs, Sainz, Grosjean and Alonso had all made significant improvements, Verstappen only able to improve by around 1s.

Looking set to improve on his first qualifying sim run, Vettel aborted the lap as his front-right appeared to hit the wall... twice. "I brushed the wall," he confirmed. Back in the pits however, it was soon apparent that it was more than a brush, the Ferrari having somehow sprung a leak. An early blow - literally - for the German's Singapore hopes.

As the long runs got underway, Vettel was out of his car and removing his overalls, not the best start when you're 30 points down on your rival.

An improvement from Vandoorne meant that Williams took their, now, customary positions at the foot of the timesheets, and while Singapore might be the great leveller for some teams, for Williams it appears to be 'business as usual'.

Indeed, as Stroll was told that his rear brakes were too hot, flames could be seen licking from his right-rear, the Canadian subsequently heading back to the pits where it was discovered that a carelessly discarded rip-off was the culprit.

With the long runs in full flow, Stroll and Vettel were the only two drivers sidelined.

"Another a-grade ***hole," declared Ricciardo feeling he had been blocked by Sainz.

There was a heart-in-mouth moment late in the session when Ericsson spun, the Swede lucky not be hit by Alonso who was right rs behind him and doing well to keep it out of the barriers. The Sauber crew have been busy enough today.

On the long runs, Ricciardo appeared to have the best pace, certainly on the ultras, while Raikkonen and the Mercedes duo were struggling on the hypers.

Hard to get an idea of Verstappen's pace as the Dutchman was unhappy with his car, complaining of engine hesitations.

While Raikkonen topped the final timesheets ahead of Hamilton and Verstappen, it was Ricciardo who looked most at ease, the Australian having a particular affinity with street tracks.