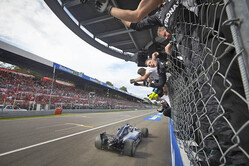 On successive laps - 20 and 21 - the Mercedes crew headed into the pitlane, suggesting that one of the drivers, most likely Lewis Hamilton, was about to pit.

However, while the Briton didn't actually stop until lap 28, it was Kimi Raikkonen who pitted on lap 20, the lap the Mercedes crew first appeared.

Speaking after the race, team boss Toto Wolff denied the 'dummy' pit stops were aimed at provoking Ferrari into a move.

"It wasn't a phantom stop," the Austrian told reporters. "You need to be prepared if you undercut or overcut. We didn't know if Kimi was coming in so the message was to do the opposite. Doing the opposite means you need to have the pit crew prepared."

The rules state that "team personnel are only allowed in the pit lane immediately before they are required to work on a car and must withdraw as soon as the work is complete", which led to the inevitable suggestions on social media that the German team was pulling a fast one.

"My feeling is that it is all part of the game," Charlie Whiting subsequently told reporters. "We don't like teams hanging around in the pit lane if they are not actually doing a pit stop, but if they come out as if there are going to do one... if they did it every lap, then I think we would have something to say.

"But they may well have been thinking about doing one and then changed their mind, so unless someone does something overtly incorrect I don't think we will do anything about it."

Asked if the presence of the Ferrari crew on lap 20 might have obstructed Raikkonen's approach to his pit, the Briton replied: "If they do then we will have a look at it. If it's clear that that's what they are doing, to make it more difficult for another car to come in and they had no intention of pitting, then we might well want to investigate it."