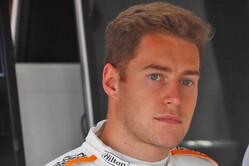 In FP1 it was a brake issue, in FP2 he required a new floor; last in every single session and again in the race, it's fair to say that Stoffel Vandoorne's home Grand Prix was pretty much the weekend from hell.

Adding insult to injury, his team was marking fifty years since (team founder) Bruce McLaren's first win for the Woking outfit, while Vandoorne sported a special themed-helmet in honour of the team's rich history.

His weekend from hell on-track, comes at a time of increasing speculation over his future, not only in terms of whether he will retain his seat for 2019 but whether he will even see out the current season, with paddock talk suggesting that Esteban Ocon is to replace him should Lance Stroll move to Racing Point and thereby kick-start a driver reshuffle.

Out-qualified by his teammate at every race this season, Vandoorne has had a torrid season, which even his illustrious teammate, Fernando Alonso, inists is not entirely down to the Belgian.

Aware of the fact that his days appear numbered, Vandoorne insists that the root of his issues is the car itself.

"It's difficult to get a worse weekend," he admitted. "We've seen the performance we have is very far away from being good.

While Toto Wolff claims the Mercedes has many deficits, so too the McLaren has numerous issues, not least a lack of updates.

Looking ahead to Monza, where things are not expected to get any better, the youngster said: "Monza will be very difficult... again, it's a circuit with a lot of straights

"We'll see," he sighed. "Maybe we have a couple of opportunities later in the year to score some points, like in Singapore.

"There haven't been many encouraging things this weekend," he added. "It wasn't the nicest race of the year."