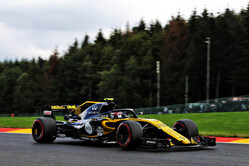 Renault Sport Formula One Team found frustration in Spa-Francorchamps with neither car proceeding to Q2 in qualifying for the Johnnie Walker Belgian Grand Prix.

Nico Hulkenberg: "The one lap I did today was pretty much on the pace, so the car felt alright. Q3 looked like it was exciting and it would have been nice to be involved, but with the engine penalty it made sense for us to skip the rest of qualifying to save the engine as it needs to go a long way from here. We have to be realistic for tomorrow and it won't be easy to get into the points. Having said that, overtaking is possible here and our top speed has been competitive so far this weekend, so I want to have a good race and have a bit of fun and hopefully there will be a nice reward at the end."

Carlos Sainz: "Qualifying didn't go as expected. We're looking into what's happened with the car as it wasn't behaving as normal, it was strange as I had a lot of oversteer, which is something I've not had all weekend. The car felt fine yesterday and this morning, then suddenly for qualifying it's not how it was. It's tricky to understand, and we'll be going through the data to figure out why. It's a circuit where you can overtake so of course tomorrow is another day and we'll be looking to work our way through to the points."

How was qualifying today?
Alan Permane, Sporting Director: With Nico, we knew he would start from the back of the grid due to his PU penalties so we only planned one run in Q1. With Carlos we need to thoroughly investigate his car and the data, as it's clear he was unable to extract performance from the car in the same manner he has through the rest of the weekend so far.

What can be possible from the back of the grid?
AP: It's a long lap at Spa and overtaking is possible. There's always the potential for variable weather too, meaning that we have to maximise every opportunity. Starting from further down the field allows us to be more creative with strategy, so we'll be looking for every chance to move forwards.