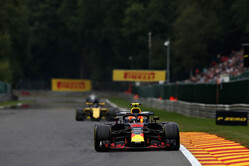 Max Verstappen: "Starting seventh is not what we wanted but it was a tricky situation out there today. We fuelled for two laps, one of those for slicks and the other for Intermediates. It stopped raining towards the end of our laps and the track dried a little but if we had stayed out and gone for another lap we would have run out of fuel. It's frustrating as the time we spent on track was competitive so I'm sure we could have been closer to the front. Even my last quick lap could have been a little better as I ran out of energy in the last sector and I had expected to use it on just one lap. I think we made the correct decision to go on to the Intermediates, it was just bad luck that it stopped raining and we had no fuel left. In general Qualifying was good and the car felt good, we just got caught out in Q3. We have really low downforce on the car so we should be able to overtake some cars ahead of us that usually would not be there. With the unusual mix at the front it should be an interesting first few laps."

Daniel Ricciardo: "Timing is difficult here and the weather is just so unpredictable. Once it started raining, we thought it would get heavier, but five minutes later it started to dry and by then we had used our tyres and fuel. As a team, we thought we were doing the right thing to get out on the Intermediate as quickly as possible while it was still not that wet, but at the end of the session the cars still on track had the best conditions. It was unlucky and in normal circumstances once it starts raining it usually gets worse and worse but today that just didn't happen. In hindsight, the strategy didn't work but at the time it looked like the right thing to do. Even if it's raining in the pitlane here it could be 40 degrees at the other side of the track so we just missed out. I've struggled all weekend with speed and there are still some unknowns. In Q1 I had to put two sets of tyres on to get through, even though we weren't expecting to be that quick around here, we shouldn't be in that position and we will try and find some answers tonight before the race tomorrow. Even though we haven't been that quick so far, tomorrow we can be more optimistic, even starting eighth. We are definitely better than that and we will try and charge through. I'm sure a few cars in front of us won't be as strong on race pace so we will be moving forwards and not backwards."

Christian Horner, Team Principal: "We progressed through Q1 and Q2 without incident and then for Q3 the rain was in the air but the question was how much was going to come. All cars left the pits on slick tyres with all bar Force India electing to pit at the end of the out lap. We had enough fuel in the cars for a couple of laps, thereafter with the rain looking like it was going to get worse, we elected to turn the cars round quickly and get back on track as soon as possible. Both drivers did a great job setting third and fourth quickest laps at that time but unfortunately there wasn't then enough time to pit and refuel for another run. With the circuit improving as the rain held off P7 and P8 were the end result but this should produce an exciting race tomorrow."