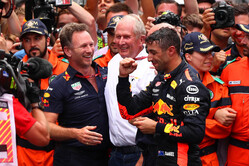 Danny Ricciardo's decision to sign for Renault is one of the biggest surprises I have experienced in sixty years of following the sport.

When he phoned to inform Christian Horner, Christian thought that he was joking. After all, Danny had got what he wanted in contractual negotiations. Most drivers want the longest contract they can secure, especially with a top team, Ricciardo wanted just a one year deal so that he could play a role in next year's driver market. Danny knows his worth.

Not only that, but he had video recorded a statement to be released when ink was finally on a contract.

Some have called Danny's move a mistake and among them is Jolyon Palmer, who spent two years with Renault and who is now a pundit with BBC radio. To my mind, the person who has made the mistake is Christian Horner.

Danny has used Renault engines for each of his seven wins and he must know the guys there very well. Unlike Horner, Ricciardo has not muddied the water by blaming Renault. More, Danny knows how much Renault have advanced - their engines have given him seven wins and do not fail as often in their own chassis as they do in Red Bull's. One has to ask whether there are issues with Red Bull's installation.

Though Red Bull is a top team it is still a customer team whereas Renault is a works outfit which is in the sport to shift metal from showrooms. By securing Ricciardo, Renault has weakened Honda's thrust with Red Bull which begins next season. Honda cannot be best pleased about that because it will be making a substantial financial input to RBR and must have assumed that Red Bull would be fielding two Grand Prix winners.

Renault has also signed a driver with no other loyalties. Esteban Ocon must have been considered, he being French, but Esteban would have come courtesy of Mercedes, just as Sainz has been courtesy of Red Bull. Ricciardo is unencumbered.

As well as being a star on the track, Danny is one off the track. I have yet to hear anyone say a negative thing about the man. He is sponsorship gold dust in every market whereas Max Verstappen is big only in Belgium and der Nederlands. To many non-partisans, Max comes across as gifted, but also as a spoiled brat.

By contrast, Danny is an asset to any sponsor because millions of us like him. He is mighty in a car and he passes the most basic test of likeability: you would buy him a beer in a pub.

According to one newspaper report, Danny is to receive Ł20 million a year from Renault and that must have played a part in the negotiations.

Red Bull Racing signed Max Verstappen for a huge salary on a long contract thus promoting him to be team leader. That told Danny that Max was seen as the team's long-term future, while Mr Ricciardo had to fit in when, or if, it was convenient.

Sebastian Vettel won four consecutive championships with RBR when Ferrari came a-courting in 2014. Der Wunderkind was able to squirm out of his Red Bull contract due to a clause that allowed him release if the team failed to provide him with a competitive car.

It was common wisdom that the Renault powertrain was the least competitive of the three but, with the same equipment, Ricciardo won three races and out-qualified Vettel from Russia on. In 2014, racing on equal terms, Ricciardo scored three wins to Vettel's zero, and was 3rd in the Championship with 238 points while Vettel was fifth on 167.

Vettel went into whinge mode, his default setting, while Ricciardo got on with the job and produced some epic drives while winning an army of fans.

Alas, on-track achievement is not now the only measure and it would appear that Christian Horner is persuaded by other things, notably performance on a simulator. In these days of limited on-track testing, the arcade game on steroids has become very important.

In terms of speed on the track, the simulator was not wrong about Max, which promoted him from Toro Rosso, but it had no program which would predict or measure Max's bratishness. When Danny is lining up to overtake a rival, I relax and prepare to enjoy a move that is likely to be both clinical and audacious. Ricciardo really is the last of the late brakers and he is wonderful to watch.

When it is Verstappen, you never know whether you are going to see a breath-taking move or a walk back to the pits with invective and accusations.

As Ron Dennis once said, in a different context, the ability of a driver to overtake is surprisingly rare.

By making Verstappen team leader on a salary way out of line with his actual achievements, Red Bull was taking Ricciardo for granted and that is something you should never do in a relationship. Danny is to go and that means a seat to fill long before RBR expected. I bet Christian Horner did not expect to have to consult Verstappen on who to sign for 2019.

It would seem, though it has been denied, that Max is not keen on Carlos Sainz, from when they were team-mates at Toro Rosso. It appears that Max is prepared to screw Carlos's career on a whim.

This suggests to me a lack of confidence and leadership abilities because it is rare for a top driver to object to a team-mate. The Number One does not have to balance the books or devise race strategy, what he has to do is to drive his Nomex socks off.

Christian Horner made a huge mistake in making Max Verstappen team leader and we can see how big a mistake that was because he has lost Danny Ricciardo, RBR's actual star driver. Horner is supposed to be an arch-strategist, but he did not see how much Renault would win if they lured the one proven winner who was free of contract.

McLaren would have given Danny a mega-salary as well and Horner apparently did not see that either. It is the reputation of Christian Horner which has taken the biggest knock. He is now the man who lost Danny Ricciardo and who is now learning what a loss that is.

Danny is a seven-time winner and there is not even a one-time winner free of contract. To put Danny into perspective, Keke Rosberg, the 1982 World Champion, won only five Grands Prix in his entire career.

Nico Hulkenberg, Danny's future team-mate, has effectively been demoted by the newcomer, but he has been admirably upbeat. He is unlikely to be on anywhere near Ricciardo's salary, but for him the signing shows the seriousness of Renault's intentions which is good for the Hulk as well. For Nico it is a chance to pit himself against a GP winner in equal equipment.

As we broke for the 2018 summer hols, Nico was 7th in the standings, the best position of a driver outside of the top three teams. After 147 races, Nico has yet to score a podium, but he must believe that he is better than that. From next year he will have an opportunity to prove it during every qualifying session.

Compare Hulkenberg's response to that of Verstappen who, it is rumoured, does not want Carlos Sainz in the same team. You can almost pity whoever RBR signs to a seat which would be much more attractive were it not for the team leader.