F1 will do "all in its power" to help Force India, promises Brawn. 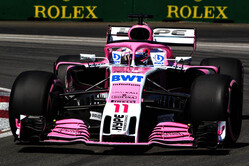 The Silverstone-based outfit went into administration on Friday, the first day of the Hungarian Grand Prix weekend, and thus began the process by which it is hoped a new owner can be found for the team.

"Formula One will be doing all in its power to ensure the team survives," said Brawn, "and I truly hope that in the coming days and weeks its future is resolved.

"Over the past few years the Silverstone-based team has been an amazing example of what can be done with limited resources," he added, "showing that what you do and how you do it is much more important than the size of your budget."

However, one unexpected obstacle has already been placed in the way, courtesy of Renault, Williams and McLaren who are refusing to agree that the team can continue, albeit with a new name, and thereby still receive its share of the TV revenue and prize money.

F1 boss Chase Carey sought to get the agreement of all the teams over the weekend, but Renault, Williams and McLaren all refused to give their agreement.

Though none have made comment, it is understood that while Renault is unhappy with the increasing power wielded by Ferrari and Mercedes through its B teams, though in agreement with this aspect, McLaren and Williams are both also eyeing a share of Force India's outstanding prize money which could be worth around $150m.