Vettel: I won't lose any sleep 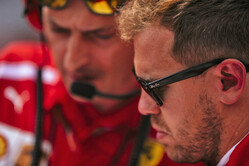 While in the immediate aftermath of the mistake which saw him career of the track and into the barriers in front of thousands of fans today, Sebastian Vettel was clearly emotional, shortly after he played down the significance of an incident that saw him lose his championship lead to Lewis Hamilton.

Sitting in his car, wedged into the barriers as the field raced by, the German, in his obvious frustration could be seen banging his steering wheel in disgust.

Shortly after, as he apologised over the team radio, telling his crew, "I'm sorry guys", the emotion was all too obvious.

However, speaking at the end of the race the German was remarkably indifferent about the incident and its after effects.

Asked how he would process such a disastrous end to a home race that was his to lose, and which he lost, he replied: "Well I was in the barrier and realized I won't get out from there... so how do you process that?" he snapped.

"I don't think it was a huge mistake," he continued, "it was a huge impact on the race because we retired, but it's not like tonight I will have difficulties to fall asleep because of what I've done wrong.

"I think it's disappointing because up to that point everything was sweet," he added, "but as I said we didn't need the rain.

"We have a strong car, so we can be as confident as... more than anyone else. It was a very positive weekend and it was just one of those moments and my mistake.

"So apologies to the team, they did everything right, and I had it in my hands. Small mistake, big disappointment."