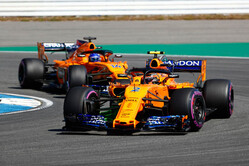 Heavy rain throughout the morning meant neither driver posted a time in the final practice session at Hockenheim. Both drivers took to the track to examine the conditions shortly after the start of the session - Stoffel doing two out-laps and Fernando one - but the team deemed it too wet to do any representative running.

Despite threats of further rain and storms, conditions improved in time for qualifying, which remained dry for the full hour.

Stoffel, still battling car issues affecting the balance of his car, struggled to set a solid time on his final quick-lap. He qualified in 20th position, but will start 19th due to penalties for RIC.

Fernando, meanwhile, had a more positive session, finishing 14th in Q1 to progress through into Q2. With a run each on both the Options and the Primes, he ultimately qualified in 11th position, allowing him a free choice of tyre compounds for tomorrow's race.

Fernando Alonso: "I'm definitely happy with 11th, as it's a small pole position for the midfield group. Tomorrow we'll start on the tyres we wish, and they'll be new, so it's a great opportunity to score points as we're starting already close to the points zone. It'll be a close fight but normally on Sundays we pick up a little bit of pace, so we'll try to do our best and have a good race.

"We had the benefit of [Lewis] Hamilton and [Daniel] Ricciardo not running, this is clear, but still we completed a good qualifying.

"The car is getting better; the new parts are definitely improving our performance but everyone else is making small steps every race so we keep more or less the same gap with our rivals. However, we are moving in the right direction and hopefully we can bring more and bigger upgrades to the next few races.

"We need both McLarens to score points so we have to find what the issue on Stoffel's car is, as it's the second race that we've seen less downforce and a problem with that car."

Stoffel Vandoorne: "The situation today was the same as at Silverstone. Since we hit the ground there we were the last car by some margin, and it's turned out the same today and all weekend so far. It's frustrating as we've changed a lot of parts on the car to try and fix the problems, but we haven't yet managed to find a solution.

"I definitely haven't forgotten how to drive. Between me and Fernando the cars are in a similar spec, but we can see some issues on the data on my side. The team has put in a lot of effort to change parts already, but it seems like we're not really moving forward much and the team is looking at various options to see what else we can do. The priority now is to find a solution for the problem we have.

"Tomorrow I have nothing to lose, so the only way is up from here and hopefully we can extract a little bit more out of it."

Gil de Ferran, Sporting Director: "Obviously we're disappointed with the outcome on Stoffel's side today. It's a shame that we lost FP3 due to bad weather conditions, which would have a been a good opportunity to better understand the issues.

"Fernando had a very positive day. The team, both back at the factory and at the track, made some very good decisions overnight to enable us to take a step forward with the car today. Not enough can be said about his performance, which has put us in a very good position to have a strong fight in the race tomorrow.

"It looks like we have all the ingredients in place for an exciting German Grand Prix on our return to this legendary track."