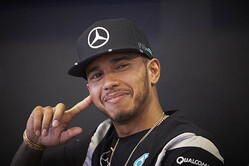 "Kimi said sorry and we move on," the Briton wrote on Instagram. "It was a racing incident and nothing more."

"Sometimes we say dumb things," he wrote, going on to reveal that the race had drained him.

"I lost nearly 3kg trying to get back to the top for you and my team," he wrote. "I barely had any energy at the end to stand, let alone talk.

"If you can't understand and appreciate that, then I fully understand. However, it was nothing to do with anger, literally just exhausted both mentally and physically.

"Thank you to everyone for the incredible support this weekend. We win and lose together. Onwards and upwards."

In a subsequent response to a fan who defended Hamilton, she added: "Just to be clear, I was not talking about the driver but the team who was crying afterwards that someone did something on purpose... No he didn't. It's called racing."