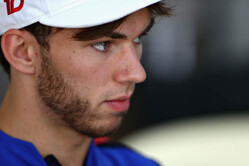 Toro Rosso's Pierre Gasly has been handed a 5s time penalty for the late collision with Sergio Perez during today's British Grand Prix.

The pair were battling hard in the closing laps following the second safety car, and touched as they battled for tenth.

Both drivers were called before the stewards who felt that Gasly’s manoeuvers were generally reasonable, and that he was attempting to make a good racing pass, while Perez left him sufficient room throughout.

However, the Frenchman touched the sausage kerb at the apex of Turn 16 which caused him to collide with Perez. This subsequently forced the Force India off the track on his left before Turn 17 and severely compromised his ability to race through Turns 17 and 18, and Gasly was thus able to pass the Mexican.

The Stewards determined that Gasly was wholly or predominantly to blame, and while the collision was light it led directly to the pass.

Consequently, the Stewards ordered a 5 second penalty which dropped Gasly from tenth to thirteenth and promoted Perez to the final points scoring position.

In addition, Gasly was handed 2 penalty points on his licence bringing his 12-month total to 4.