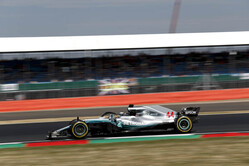 Ahead of today's sole practice session, the air temperature is 22 degrees C, while the track temperature is 39 degrees. It remains sunny and very warm.

Lewis Hamilton led a Mercedes 1-2 in FP1, but in the second session it was clear that Ferrari is up for the fight, Sebastian Vettel finishing 0.187s ahead of the world champion.

Unhappy with the track surface, claiming it is the bumpiest he has driven on, Hamilton admits that this will be a hard-fought, physical weekend.

Furthermore, in the wake of last weekend's double DNF, the Briton will hardly have been comforted by the fact that teammate Valtteri Bottas has taken on his third power unit of the season as his Austria unit is returned to base for further checks.

There were two significant incidents yesterday, Romain Grosjean crashing out in FP1 and Max Verstappen in the second session.

While the Haas driver admits to being caught out while using DRS in Turn 1, the Red Bull driver conceded that he had been pushing too hard.

Based on yesterday's sessions, Ferrari and Mercedes seem pretty matched with Red Bull there or thereabouts.

Fernando Alonso and Nico Hulkenberg were right up there with Force India, while Leclerc and Magnussen also looked strong.

Overnight, 'sausage' kerbs have been laid around the outside at Turn 1 after a number of drivers were seen to be taking full advantage of the generous run-off.

Vandoorne leads Leclerc out on to the track to get the session underway.

As more drivers head out, Vandoorne is running very, very slowly. However, the fact that the Halo is smothered in flo-vis indicates the team is doing some aero test

Once a few (8) drivers have been out for an installation lap there is a lull.

Verstappen heads out, the Dutchman on the softs, which he never got to run in the second session. An even mix of all three compounds so far.

Verstappen gets straight down to business, posting an exploratory 1:50.527 as he reveals he wanted to upshift but downshifted. Next time around he improves to 29.238.

Raikkonen posts the second time of the day, posting a respectable 27.913 on the softs.

Vettel posts 28.190 and Grosjean 29.675 as Gasly reports his steering is veering to the right.

Quickest in all sectors, Raikkonen consolidates his top spot with a 27.607 as Gasly posts 30.050.

Out comes the red flag as Hartley has a big crash at Brooklands (T6). Asked if he is OK, he replies "suspension failure".

Indeed, replay shows the kiwi was a mere passenger as the left-front suspension suddenly collapsed at high speed and the car speared into the barriers. A worrying failure and one which will require full investigation.

As the barrier is repaired, the debris cleared and Hartley taken to the medical centre, Vettel is one of several drivers to enquire after the New Zealander.

As the session resumes, with 33:00 remaining, only five drivers have posted times.

Understandably, there is a mad rush to get back to work.

As Hamilton begins his first flying lap of the day, Vettel goes quickest in S1. The Briton subsequently goes quicker. Vettel improves to 27.851 but Hamilton responds with a 27.701, just 0.094s off Raikkonen's pace.

Bottas goes fourth (28.281), ahead of Verstappen, Magnussen, Grosjean and Ocon.

Ericsson is told he's losing two-tenth to Leclerc in T1.

In the Toro Rosso garage, crew members form a wall in front of Gasly's car as the front suspension is checked.

Hamilton improves to 27.442, having been quickest in S2, while Bottas fails to improve after hitting traffic in the second and third sectors.

When he queries the call to "box", Hulkenberg is firmly told; "because there is an issue we need to sort out". All that's missing is "so do what you're told and box!"

Ericsson goes seventh (29.236), ahead of Magnussen, Alonso, Ricciardo and Grosjean.

Having gone quickest in S1, Hamilton subsequently aborts the lap and pits.

Vandoorne complains of "zero, zero rear grip", "it's like something was broken at the back," he adds.

On the medium, Ricciardo improves to eighth with a 29.181, the quickest of all the medium runners thus far.

As the qualifying sims begin, Raikkonen posts a 27.199 having been quickest in the two final sectors.

Hulkenberg's problem appears to be related to overheating.

Bottas posts PBs in the first two sectors, finally crossing the line at 27.364 to go second. However, Raikkonen has gone even quicker in S1, maintaining the pace into S2. Crossing the line at 26.815 he says "I still have an issue in turn 4, a disaster". He is given an adjustment to try on the entry to T4.

In response, Hamilton goes quickest in S1, and like Raikkonen he maintains the pace. At the line it's 26.722 as he goes quickest by 0.093s... to the great delight of the crowd.

Ricciardo is told that Raikkonen improved on his second push lap. "I don't think that's going to be the trend," the Australian is advised.

The Red Bull driver posts PBs in all three sectors, crossing the line at 28.415 to go fifth.

A 28.012 sees Verstappen go fifth, just ahead of his Red Bull teammate.

Despite being advised drivers weren't improving on subsequent laps, Ricciardo improves with a 28.018 but remains sixth.

Leclerc goes seventh (28.146) as the battle between the two Ferrari customer teams continues.

"What happened at T17, I lost the rear end massively" asks Perez. "You were a bit aggressive on the kerbs," comes the reply.

As the session ends, all bar Vettel and the Toro Rossos are on track, the German hasn't done a qualifying sim.

So, advantage Hamilton in FP3, and while Raikkonen looked strong, it's unclear why Vettel didn't do a qualifying sim or indeed any serious running after the red flag.

Then again, with temperatures set to rise over the two hours before qualifying...