Kerb to be added at Club to prevent track limit abuse 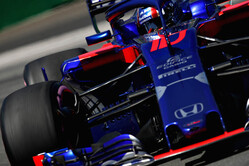 Following consultation with the drivers tonight, the FIA is to introduce an additional kerb at Club corner to prevent abuse of track limits.

Over the course of today's two practice sessions almost all the drivers ran wide at Club, the final corner leading on to the pit straight.

While the FIA is only usually concerned at track limits when drivers are seen to be gaining an advantage, it was feared that in qualifying and during the race they would use the outside of the corner to their benefit.

At tonight's driver briefing it was proposed that a kerb, similar to that used in Austria, be placed around the outside of the corner, and while it was initially thought that this meant for next year's race, the work is to be carried out overnight.

Overnight, a 25m section of 50mm high kerbing, similar to that used at Turns 1 and 3 in Austria, will be laid 1.5m back from the white line that marks the exit of the corner.

"If someone would tell me I'm guilty I'd say, ‘yes,' because I was going completely out, because it's lap time and you want to go as fast as you can.

Referring to the new kerb, he admitted: "It's a way to make it a bit more fair between everyone and it's probably a good idea."