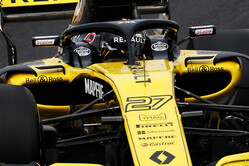 Renault has confirmed that the engine that failed Nico Hulkenberg in Austria cannot be salvaged.

The German retired on the eleventh lap of the race with what turned out to be a blown turbocharger.

Speaking after the race Cyril Abiteboul claimed that the turbocharger was the only component that would need replacing. However, ahead of this morning's opening session it was revealed that in addition to a new turbocharger, Hulkenberg had taken on a new ICE (internal combustion engine).

This is the German's third ICE and turbocharger of the year, and therefore it is likely that in the not too distant future he will incur his first grid penalty of the season for exceeding his allowance, Renault looking to introduce its next upgrade later in the season.

"Unfortunately it's gone," confirmed technical director (chassis) Nick Chester. "When the turbo failed, we ingested some debris through the engine and damaged it so we can't really use it again."