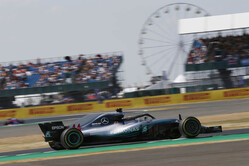 While England is often associated with changeable weather, conditions were dry and warm all day, with track temperatures in excess of 45 degrees centigrade. Similarly warm weather is expected for the rest of the weekend.

Mercedes was quickest in the first free practice session this morning, courtesy of Lewis Hamilton on the soft tyres, while Sebastian Vettel used the same compound to go fastest in the afternoon. While both sessions were notably quicker than their equivalents last year, Hamilton's pole time from 2017 is yet to be beaten.

The new track surface at Silverstone has contributed to these faster times, but drivers have also described it as bumpy. All three nominated tyres were used extensively today, with the P Zero Ice Blue hard making its 2018 debut.

Mario Isola: "No real surprises today, with all the compounds performing exactly as we expected them to and no issues encountered. This is despite Silverstone being one of the most demanding tracks of the year with its long and high-speed corners, intensified by high temperatures all day that are expected to continue into the weekend. The bumps and a changing wind direction were two more hurdles for drivers to overcome, but they managed to complete their scheduled programmes as planned, learning not only about the new surface but also about the hard tyre and how it relates to the end two other well-known compounds that we have brought to Silverstone. The gap between the compounds so far is slightly bigger than expected, with two seconds covering the whole selection here from hard to soft."