Boullier out at McLaren 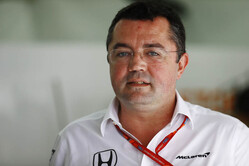 McLaren Racing has announced a leadership restructure of its racing operations, with immediate effect.

Chief Executive Zak Brown has confirmed that he has accepted Eric Boullier's resignation from his position as Racing Director, while also announcing a simplified technical leadership team.

According to the Woking outfit "these changes are the beginning of a comprehensive programme of positive changes to the technical leadership of McLaren's racing organisation. The team will invest to retain and attract the best talent, internally and externally, to return McLaren Racing to the front of the grid."

"The performance of the MCL33 in 2018 has not met the expectations of anyone at McLaren, especially our loyal fans," said Zak Brown. "This is not the fault of the hundreds of committed and hard-working men and women at McLaren.

"The causes are systemic and structural, which require major change from within. With today's announcement, we start to address those issues head on and take the first step on our road to recovery.

"I would like to take this opportunity on behalf of the entire team to thank Eric for his service and contribution to McLaren and wish him well in his future endeavours."

"I am very proud to have worked with such a brilliant team over the past four years," added Eric Boullier, "but I recognise now is the right time for me to step down. I want to wish everyone at McLaren the best for the remainder of the season and for the future."

The move comes two weeks after the Daily Mail claimed that Boullier would be out by the British Grand Prix - the Frenchman subsequently getting involved in a heated exchange with the journalist behind the story at the official press conference at Paul Ricard - and as a result must add a certain amount of credence to the claims of unrest within the team, claims that included a "toxic" atmosphere and "useless" management.

Furthermore, at a time Christian Horner claims that Mercedes strategist James Vowles was "thrown under the bus" by the German team, one has to point out that Boullier was not responsible for the design of the MCL33, nor was he responsible for the decision to drop Honda in favour of Renault.