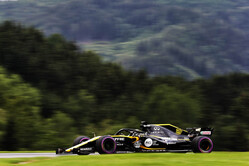 The sound of the Renault Sport Formula One Team reverberated in the Austrian hills as Carlos Sainz was the team's quicker driver today, setting a time just seven hundredths off the top ten at the Red Bull Ring on the opening day of the Eyetime Grosser Preis von Osterreich.

Carlos lapped the 4.3km circuit in 1min 05.999secs, the eleventh-fastest time on a cloudy day visited by occasional light rain. Nico ended both sessions as the fifteenth fastest.

Nico Hulkenberg: Nico: "It's been a fairly typical Friday. The balance isn't quite there with the car so we've been tackling that as a priority. We didn't make as much progress as we'd like between FP1 and FP2 and understeer has been our enemy here so far. Fortunately, it's an enemy we know well so we have some good solutions to apply before we head out for qualifying tomorrow."

Carlos Sainz: "We've been working hard today on getting the right set-up with the car and you could see we're not quite there yet. Nevertheless, we have a decent number of laps on the board and we know what we need to improve to get a faster and more balanced car. I think we have the potential so I look forward to tomorrow."

Bob Bell, Chief Technical Officer: "Today we didn't really find a good balance on the car. Neither driver was particularly happy as we had a lot more understeer than we would like which is hurting the front end, which consequently isn't good for the tyres. We can make a big improvement on that for the rest of the weekend, especially if the track temperatures come up a little. The car ran reliably and the new MGU-K system works well. We have the information we need, now it's about striking a better balance."