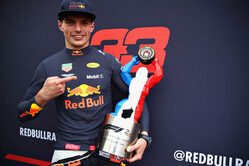 Asked by a British journo in Canada why he had so many accidents, Max Verstappen, who had already explained his (Monaco) FP3 crash and a couple of others, jokingly replied: "I get really tired of all these questions, so... I think if I get a few more I'll head-butt someone."

Needless to say, the question was repeated, albeit by another (British) journalist who insisted that in light of the sheer number of incidents it was a legitimate question.

"I've had two which were my fault," Verstappen responded, "but I had, for example, three in one weekend in 2016. It is not as dramatic as people say it is. Of course, I haven't scored the points which I should have scored, but that was not only my fault. It could have been better, but everybody makes it so dramatic."

In the wake of this 'trial by media', it was understandable that the youngster should feel more than a little miffed, and while he has since poured his energy into positive results, when asked about Sebastian Vettel's 5s penalty for clashing with Valtteri Bottas, the Red Bull driver saw an open goal.

"I think next time you see Seb you should ask him to change his style, y'know?" he replied. "Because honestly, it's not acceptable."

As a strange silence fell over the press conference, the youngster continued.

"That's what they said to me at the beginning of the season, so I think they should do the same! And then, of course, Seb shouldn't do anything, and just drive again and learn from this and go on. That's my advice to everyone in this room."

In a subsequent interview with Sky Sports, Verstappen's mood hadn't changed, he was clearly still angry at the media's double-standards, having given him such a hard time while effectively seeming to dismiss Vettel's mistakes.

"I'm getting annoyed about it," he admitted. "Mistakes happen and they happen to the best of us. But it makes me angry because they won't be as bad on him as they were on me.

"All the time they came to me on how l should change my approach and these stupid comments. I didn't change a thing and now everything is going right."