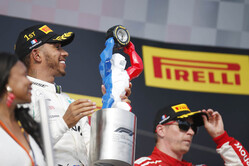 Lewis Hamilton won a race for Mercedes that was heavily influenced by the first lap, when two of his rivals clashed and a safety car came out for five laps. A number of drivers made a pit stop under the safety car due to car damage, notably Ferrari driver Sebastian Vettel and Mercedes driver Valtteri Bottas, who both switched onto the soft tyre on lap two before making a second stop in the closing stages of the race. Both finished in the points, having dropped to the back, after capitalising on this improvised strategy to move up the leaderboard as others stopped.

The strategy for Mercedes and Red Bull was to start on supersoft: Hamilton (along with runner-up Max Verstappen) then switched onto soft for the final stint. Ferrari's Kimi Raikkonen adopted an alternative one-stop strategy that resulted in a strong podium finish.

Mario Isola: "An uncertain weather forecast added to the strategic game today, with the risk of rain meaning that teams wanted to avoid the risk of getting caught out on the wrong type of tyre. As it was, the rain didn't actually materialise, but it was another potential factor to bear in mind. As expected this was a one-stop race for most drivers, but there was a wide variety of one stoppers, including some very long stints on the soft tyres. We also saw Sebastian Vettel and Valtteri Bottas complete the race strongly with two very different two-stoppers, with Ferrari and Mercedes having split their strategies across each of their cars, reacting to the race circumstances. This confirmed our expectation that all three compounds were valid choices as part of an overall race strategy today, delivering a strong performance throughout".