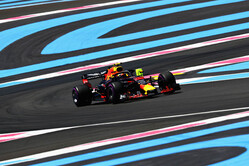 Ahead of today's opening session as F1 returns to Paul Ricard following a 28-year absence, the air temperature is 25 degrees C, while the track temperature is 43 degrees. It is bright and sunny.

This being a new track to all the drivers - certainly as far as F1 is concerned - and the first part of a triple-header, it is understandable that there are no reserve drivers in action today.

The big news is whether Mercedes is going to run its upgraded engine today... this weekend... or in the coming races, the German manufacturer remaining mysteriously tight-lipped.

The Mercedes duo will be running a new engine but the question is, is it the new new engine or the old new engine.

The lights go green and Ericsson leads Magnussen and Vandoorne as what should be a busy session gets underway.

Vettel - and one of his crew members - is lucky not to be T-boned in the pitlane as the Ferrari leaves its garage as two cars are fast approaching.

Whatever engine he's using, Bottas posts the first time of the weekend, the Finn stopping the clock at 1:35.797.

Eight minutes in and all bar Hartley have made an appearance.

Hartley finally heads out. However, the kiwi subsequently spins at T6 and is lucky not to clout the barriers.

"Big oversteer," says Hartley, "it was a bit surprising how I lost the front end."

On his first flying lap, Ricciardo goes quickest in S2, subsequently crossing the line at 34.956 to go quickest, as Sirotkin goes sixth with a 38.594.

Gasly and Stroll are the latest to post times, both over 2.2s off the pace.

It's revealed that all Mercedes-powered cars are running new ICE (internal combustion engine), turbocharger and MGU-H. Mercedes says that more info on the spec will be given after FP2.

Hartley is told to box as his team needs to fix his issue with energy management.

A spin for Vandoorne in T6, extremely similar to that of Hartley earlier.

"I don't know what the Williams was doing, we almost crashed," complains of a very slow car on his racing line.

Moments later, Hamilton has a scare when he comes across a very slow Vandoorne, who is following a very slow Ocon, leaving the Briton no option but to go wide and lock up on the run-off. "Dangerously slow," complains the world champion.

Meanwhile, Raikkonen is the latest driver to fall foul of T6, some suggesting that the problem is the very strong tailwind which follows the headwind in the preceding part of the track.

After all, this track doesn't feature a straight called the Mistral for nothing.

As Alonso is warned of the wind direction change at T6, Leclerc spins at T1.

Quickest in all three sectors, Ricciardo consolidates his top spot with a 32.576. However, in the Red Bull garage, teammate Verstappen's car is up on its stand with its floor removed.

At the forty minute mark, where the extra set of tyres are handed back, it's: Ricciardo, Bottas, Raikkonen, Hamilton, Ocon, Alonso, Gasly, Perez, Sainz and Vettel.

"We lost connection to the car so we were not able to tell you to box," Gasly is told. "We need you to box now!" comes the somewhat urgent follow-up. The reason for the urgency being that the Frenchman had to hand back his set of tyres.

Talking of tyres, Ricciardo's best was on softs, while the majority of the other ten leading drivers were on ultras, the exceptions being Alonso, Gasly and Sainz who were on supers.

After a brief lull, the session resumes and Bottas is among the first back out, along with Vandoorne and Magnussen.

Raikkonen heads out again, like Bottas he is on fresh ultras.

Magnussen (ultras) improves to eighth, despite what appeared to be a very scruffy lap.

"The car won't turn, I need to box" complains Hamilton.

A spin for Ocon in T6. The Force India takes a long, long slide across the run off, lucky not to his the barriers.

A 32.566 sees Bottas go quickest, as Hamilton goes quickest in the first two sectors, finally crossing the line at 32.273.

"I have massive understeer," says Verstappen, the Red Bull driver being told to box.

Perez and Magnussen are the latest drivers to have a 'misunderstanding' one driver (the Dane) considerably slower than the other.

Leclerc spins at the chicane that divides the Mistral. "The car is behaving very weirdly on turns," reports the youngster.

Gasly has indeed been reported to the stewards for staying out 2:43 longer on his first set of tyres than permitted.

Vettel improves to fifth with a 33.172, as Raikkonen runs wide in the final corner, caught out by the wind. "I have too much front wing," he reports.

In sixth, Grosjean is the leading home driver, just one place ahead of Gasly, while Ocon is twelfth.

Following his earlier lock-up, Ocon has chosen to break for lunch, not willing to use another set of tyres at this stage.

Indeed, as the session winds down, the Frenchman is the only driver not on track.

Ericsson is off and very much in the barriers at T11. As the session is red-flagged, flames leap from the back of the car. It seems an age before Ericsson climbs out, despite the urgent calls over his radio.

Replay shows the Swede lose the rear of the car and career off the track across the very wide run off at high-speed and hit the barriers side-on. His helmet hits the side of the cockpit in the process which possibly left him a little dazed and hence the delay in getting out of the car.

The fire has caused a lot of damage to the rear of the car and it is doubtful that we'll see Ericsson in action this afternoon.