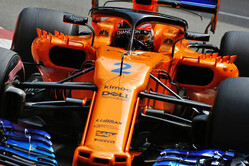 A difficult day in Montreal for McLaren with both Fernando and Stoffel enduring tough races.

Both drivers agreed that overtaking opportunities were few and far between this afternoon, and neither could make great headway through the field without the help of a good strategy call. Fernando made up three positions after his first stop and benefitted from opportunities in the Safety Car window, but a points finish wasn't meant to be - he was forced to retire on lap 41 due to a broken charge air cooler pipe which led him to lose boost pressure.

Stoffel had a right-front puncture after running over debris from the first-lap incident, and endured a slow pit-stop that put him to the back of the field - a situation which gave him little opportunity to move forward for much of the race. In addition, he spent the final laps of the race nursing an intermittent electrical management issue which meant he was unable to push the car to its limits. He finished the race in 16th place.

Fernando Alonso: "The race was fun at the beginning, especially after the restart, when we overtook three cars in two corners. Sergio [Perez] was on the grass sideways and came back onto the track, so it was difficult to anticipate what line he would have taken. Then halfway through the race, I felt a loss of power and was told to retire.

"It's sad, frustrating and I'm disappointed with this result. We weren't competitive this weekend. We need to find more performance in the car and a way to become competitive. Reliability is also important, as we saw at the beginning of the year how many points we scored and how many we've lost now in the last two races, by retiring today and retiring in Monaco when we were running in seventh position.

"There are a few areas of the car that we need to keep working on and improving, and we'll see what happens in the next couple of months.

"I'm flying tonight to France, as tomorrow I need to be in Le Mans. It will be a busy Monday and a new experience, and I'm definitely looking forward to it."

Stoffel Vandoorne: "I think we were extremely unlucky from the start today. We had a good launch off the grid, but with the accident that happened there was so much debris to find our way through into Turn Five, and it was impossible to avoid it. We had a front-right puncture, and we basically ran out of tyres already before we even really started the race, so it was a difficult day. A big piece of debris went under the car so we were forced to pit on the first lap and then lost a lot of time in the pit-stop as well. Before we even got into the race it was already over.

"On a personal note, on my side it's been very positive in terms of the progression we've made over the past couple of races. The disappointing thing here was our qualifying performance for the team as a whole. We knew that before coming here and unfortunately it got confirmed. We've got a lot of work ahead.

"It's hard to tell how the next few races will be for us. We don't want to make any predictions, and if you look at last year there were some races that we thought would be difficult but turned out to be alright. We have to wait and see. Paul Ricard will be a new track for everyone, and then Austria and Silverstone, so a busy couple of weeks ahead but I'm looking forward to that and hopefully we'll have some better luck."

Eric Boullier: "Today has been a day to forget and move on for McLaren. While both drivers did extremely well to avoid the chaos on lap one, Stoffel reported a puncture after driving over the resultant debris, and his subsequent stop lost him a lot of time under the Safety Car. From there, he was in last position, and, despite driving well to manage his strategy and pace to his nearest competitors, the unforgiving nature of the Circuit Gilles-Villeneuve meant he was unable to make significant gains on the pack ahead. To compound his struggles, he spent the final stint of the race nursing an intermittent energy management issue, which we are currently investigating. All things considered, he drove a hard-fought race to bring the car home in 16th.

"Fernando was left in a much better position than Stoffel after the first-lap chaos, and benefitted from the early Safety Car period to jump three places forward into 11th on a one-stop strategy. While we thought a points-paying result was becoming a distinct possibility, he suffered cruel luck once again and was forced to retire the car after losing boost pressure thanks to a broken charge air cooler pipe. Although very frustrating, it's an unusual problem, and one that we don't expect to affect us going forward.

"From here, the important thing is to pick ourselves up and turn our attention to our return to Europe and three back-to-back races in as many weeks. With a renewed focus, hard work and better luck, we hope an upturn in fortunes will come our way."

Check out our Sunrday gallery from Montreal, here.