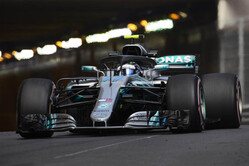 While the characteristics of their respective cars meant that Red Bull went to Monaco as favourites and Mercedes something of an underdog, the situation with the tyres didn't help either.

While most struggled on the hypersofts, the Silver Arrows were more affected than most. Indeed, in a bid to avoid the pink-banded rubber on Sunday the German team attempted to qualify on the ultrasofts... but failed.

As a result, both drivers started on hypers, Lewis Hamilton subsequently switching to ultras and teammate Valtteri Bottas to supersofts.

Throughout the race the Briton gave a running commentary on his tyre issues, and whilst initially it appeared his teammate might have made the right move, both subsequently lost out.

In the latest edition of Pure Pitwall, trackside engineering director Andrew Shovlin, admits the teams concerns, especially as the hypersoft is one of the compounds available for next weekend's Canadian Grand Prix.

Having suffered extensive graining on the pink-banded rubber, Shovlin reveals that since Monaco, the team has been focussing on how best to get them to work with the W09.

"We saw other people up and down the field in a similar situation," he admits, "but crucially for us the Red Bull looked stronger, and the Ferrari looked stronger.

"Now we've got some pretty good ideas of what went wrong," he adds, "and we're going to be doing a bit more work back here to fully understand that, because we do need to get on top of that for Montreal. We've got the same tyres, you could have similar problems, and we need to make sure that we're not exposed. In Montreal if you lose pace, and you're suffering degradation, people will pass you very easily."

Shovlin admits that on reflection, the team might have been better suited to try Hamilton on the same strategy as his teammate, switching him to supersofts as opposed to ultras.

"We had tried that tyre with Lewis on Thursday, and he'd found it a little bit difficult to generate the grip," he reveals. "It's a harder tyre, it needs a bit more work to warm it up. The other thing is we expected the race leaders to go onto the ultrasoft, so it made sense to have Lewis on the same tyre.

"If we were running the race again we would have probably gone with the supersoft with Lewis, because it was durable, and it was quick, and we saw that with Valtteri, who was having quite an easy time on that tyre to the end of the race."

However, aside from its tyre issues, the W09 clearly struggled for pace all weekend in the Principality.

"It's another thing we've been working on this week," he admits, "trying to understand exactly where the deficits are. In qualifying we were a bit behind, and to be honest we went to Monaco not expecting to match the Red Bulls. They always look good at the very high downforce circuits, circuits with slow speed corners. Monaco is a race where we've not dominated for a long, long time.

"The reality is it will be a combination of many, many things," he continues. "In qualifying I think we were getting the tyres to work quite well, it was just a question of grip, and also downforce, and keeping them cool in that final sector. We were good in sector one, but it's quite difficult to put the whole lap together. So I think there we're just looking for small differences.

"And then in the race though understanding this graining on the hyper was another matter, that won't be just down to the car performance, so we need to look at what we were doing with the car, how we were using it, how we were setting it up.

"And we're doing some work to try to understand all of those issues. But as I said, invariably and it's often the case when you suffer a performance problem, it isn't just one thing, it's a combination of a lot of factors."