Hamilton calls for changes in Monaco 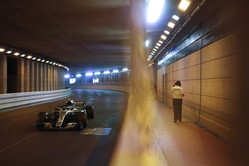 As he completed his slow-down lap at the end of yesterday's race, Lewis Hamilton made no secret of how he felt.

"Thank God that's over," he said over his radio, "that was the most boring race I've ever participated in."

"It's got the biggest build-up, it's the most special race of the year," he told reporters, "and I was thinking, 'it's such a shame that the race isn't as exciting as the whole spectacle and the track is'.

"There's no place like it," her continued, "but I think F1 needs to apply a different rule or schedule or something. You shouldn't be able to do a one-stop here. It's just insane how little I was pushing, the least that I can ever remember."

Indeed, the Briton, who has criticised the proposed layout for the Miami Grand Prix, offering his services as a consultant in terms of an alternative, suggests that Monaco too needs changes.

"I said to Prince Albert the other day maybe it's time to make it longer," he said of the track. "We are doing one minute elevens around here, there's more roads. Do we change this great track and make it even better.

"Maybe it's got to be a different format or something here. You shouldn't be able to do a one stop because that's less exciting for fans. There's got to be some mix up, we need to mix up things more, but I don't know what it is.

"If you look at NASCAR they put in a bunch of safety cars in for no reason at all to bunch the pack up," he added. "Like there's a tear off on the track which they don't even have tear offs. There's like a hundred yellow flags, I mean safety cars, in the race but it brings them altogether.

"It's just the greatest track... maybe we need two races here, who knows. That was the longest 78 laps ever. It was long."