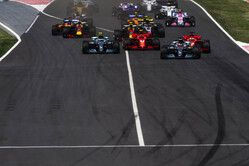 Speaking at the start of the weekend, Lewis Hamilton and Sebastian Vettel expressed surprise at the news that the FIA has rubber-stamped new aero regulations for 2019 aimed at improving overtaking.

Indeed, told that the new rules will probably make the cars 1.5s a lap slower, the German pointed out that the regulations have only just been changed to make the cars faster.

Having already questioned the layout and siting of the proposed track for the F1 race in Miami, admitting that he would be delighted to assist with the eventual layout and placement, Hamilton suggested the drivers should have more say in the sport's regulations, a move endorsed by Vettel who pointed out that as drivers they are best placed to know how the racing might be best improved.

"I do respect them and know how busy they can be and all that, but they have access," he said. "Unfortunately very often there is a meeting and they don't come.

"I have always tried to hear what the drivers were saying," he continued. "The drivers are invited to participate, to do something.

"If the drivers have some comments they are more than welcome," he insisted. "Any driver who wants to see me, from the back of the grid to the top of the grid, will be able to see me within 48 hours."

All of which is very, very odd, because, to all intents and purposes it is the sport's owners who are now making the rules, with the FIA merely doing the paperwork.