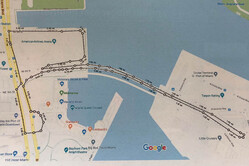 Miami's city commissioners have unanimously approved the staging of a Formula One Grand Prix as early as next year.

While the five commissioners have given their approval for the event, a deal must now be agreed with Formula One's owners.

"With the unanimous votes at both the City of Miami and Miami-Dade County's Economic Development and Tourism Committee, we are very pleased to have received preliminary approval towards bringing a Formula One Grand Prix to Miami," said F1's commercial boss, Sean Bratches, in reaction to the news.

"We recognise that this is only the start of the process and we will immediately get to work with the various community stakeholders, the City of Miami, the Port of Miami, Bayfront Park Management Trust and others, in order to reach a final agreement.

"Formula One in Miami represents a fantastic opportunity to bring the greatest racing spectacle on the planet to one of the world's most iconic cities, and we are delighted that the journey is underway."

Last week, Miami City Commissioner, Ken Russell, tweeted a map of the proposed layout of the street track which measures 2.6 miles and would pass around the American Airlines Arena, home to the Miami Heat NBA team, and run down the palm-tree lined Biscayne Boulevard, alongside the city's famous seafront.

According to FOM, the exact timing of the Grand Prix will be a matter for further discussion between F1, the FIA and the Miami authorities, but if approved at the next stage with Miami-Dade County officials, it is hoped that the inaugural race would take place in October 2019.

Later this year, as part of the "fan experience" that led to F1 Live London last year, and the fan festival in Shanghai, F1 will be hosting further fan festivals in Marseilles ahead of the French Grand Prix and Miami ahead of the United States Grand Prix.