Aston Martin: Use us as leverage in Ferrari's F1 quit threat 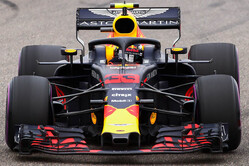 Aston Martin president and CEO Andy Palmer believes F1 could use his company's desire to enter the sport as leverage in its dealing with Ferrari.

Unhappy - to put it mildly - with the proposed engine rules for 2021, not to mention plans to impose a budget cap of $150m, halve its historic bonus and distribute the prize pot more evenly, Ferrari has not taken it well.

Though company president Sergio Marchionne has yet react in detail to the proposals put forward by FOM in Bahrain he has reiterated his earlier threat to quit the sport for a breakaway series.

As F1 shapes up for one of its toughest battles yet, new owners Liberty Media about to get their first true glimpse of why (previously) Bernie Ecclestone's dictatorial approach was needed, Palmer suggests that Aston Martin's desire to enter the sport might be use as a bargaining chip against the Maranello company.

"Liberty obviously want a new engine, they want to move the sport on," he tells F1 Racing. "The incumbent teams don't want to change the engine very much. In the old world, they would have won, wouldn't they? Red Bull at one moment were left out in the open.

"But now they've got someone sitting behind them saying, 'If you write the rules like this, we might be interested in providing an engine'. Now there's an alternative," he suggests.

"Now, when Ferrari threaten to leave the sport, Liberty can go, 'well, Aston and Ferrari, same kind of space, same kind of customer type, maybe it's not such a bad thing if you want to leave'.

However, he admits that his company, which is currently title sponsor to Red Bull, may not even enter F1, something of which Ferrari will be only too aware.

"Right now, what does F1 need? F1 needs a good kick up the arse and to remember what it's there for," he says. "It's not about an ever-greater arms race. At its heart, it's about entertaining, appealing to petrolheads and about pushing technology. The way that we're acting and behaving right now, we're upsetting the establishment. We've got people talking. And even if at the end we're not there, maybe we helped in the process of improving the sport.

"I'm not under any illusions about how difficult doing an F1 engine would be," he admits, "I'm a powertrain engineer originally. If we're really going to simplify, and cap development costs, there's a possibility we could be involved. But if I were to get involved, I'd do it with partners. If we can, we will, but we are not going to provide an engine to Red Bull that's going to sit at the back of the grid."