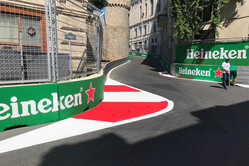 The only change to the Baku circuit ahead of this weekend's race is that the kerb at the apex of Turn 8 has been replaced in order to replicate the quick fix done after the first day of practice in 2017.

In terms of DRS, there are two DRS zones.

The detection point of the first is at the SC2 line, while activation is 54m after Turn 2.

The detection point of the second zone is at the apex of Turn 20, with activation 347m after Turn 20.

Compared to last year, the selection of tyres that Pirelli is bringing to Baku are two steps softer, with soft, supersoft and ultrasoft nominated. One step comes from the actual selection, the next from the fact that all the compounds are a step softer than their 2017 equivalents.

However, that's not the only important difference. This year, the Grand Prix is being held two months earlier than it was previously, meaning cooler conditions are expected.

With the race starting at 16:10 (12:10 GMT), track temperatures will cool rapidly as the sun begins to go down. As is usually the case, none of the free practice sessions take place at exactly the same time as the race start however.

Because Baku is a street circuit tightly enclosed by buildings, there are many areas of lights and shade, making track temperatures even harder to assess.

The main straight is two kilometres long, which means that the tyres can cool down before the braking area. After Spa, Baku is the second-longest lap of the season.

Last year's strategy was affected by safety cars and a red flag, which can play a prominent role on the narrow track - cars have often tangled in the tight confines of Baku previously.

The winning strategy involved three tyre changes last year, with the second one taking place during the safety car period and the last under red flag conditions. Daniel Ricciardo won the race starting from 10th position on the grid with a supersoft-soft-supersoft-supersoft strategy.

One of the biggest challenges for drivers last year was warming up the front and rear tyres at the same rate. With cooler conditions, this problem is likely to be accentuated this weekend.

That said, the Grand Prix was the most overtaking-friendly race of 2017, with 42 of the season's 435 successful flying lap overtaking manoeuvres.