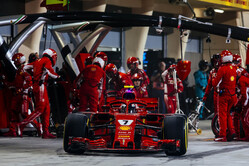 Just two weeks after the double (human) error in Melbourne which cost Haas a double points finish, Ferrari too suffered a brace of similar issues in Bahrain, both involving Kimi Raikkonen.

In the second, more serious incident, which took place during the Grand Prix itself, one of the crew on the left-rear wheel suffered a double fracture to his leg.

While the FIA is to launch its own investigation into the spate of unsafe releases - another occurring during this afternoon's session in China - Ferrari held an internal investigation of its own.

"We had an internal, accurate investigation because we were hurt about what happened," Maurizio Arrivabene told reporters in Shanghai.

"We have a procedure to ensure that the pit stops during the race are done in the safest environment," he continued. "In this case, we have three factors: One involves human control, the other involves mechanical, and the other involves electronic device.

"What happened there, we had a mishandling and the rear left was not perfectly read by the electronic device, which then gives the green light," he revealed.

"We went through all the procedure together with FIA to make sure this kind of thing doesn't happen again," he added. "It's in our interest, because we care about our people before anything else."

Asked about the condition of the mechanic who was injured, Francesco Cigarini, Arrivabene said: "Francesco is fine. He went back to Italy yesterday, so it's all under control. I was talking with him every day. He's at home, it's all OK."