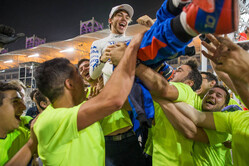 Though not wanting to take anything away from a determined drive, luck played a big part in Pierre Gasly's fourth-place finish last Sunday as team boss Franz Tost is first to admit.

"You know what the fourth place today is? It was also lucky," admitted the Austrian, according to ESPN. "Ricciardo out, Verstappen out, Hamilton had some troubles at the beginning but the race pace was quite good, constant and Pierre did not make any mistakes.

"The pit-stops went well," he added, "that means if these drivers had been in there we could have finished sixth, seventh place without any problems.''

However, with big sister Red Bull keeping a keen eye on the situation before making its decision on an engine supply for 2019, Tost admits that while delighted with the Bahrain result, he is expecting more in the latter stages of the season, though Sunday's result will be hard to match.

"Not a fourth place, but I always said within the first ten races I expect, and later on, this is all about the second half of the season, I expect both cars permanently within the first ten that means we qualify in Q3 and in the race because if our development plan from the power unit side and the chassis side goes in the correct direction then we must be there."