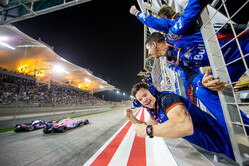 Pierre Gasly: "Unbelievable, what an incredible day! The second race of the season with Toro Rosso and Honda, and we finish P4. It's just amazing, I'm so happy! A big thanks to the team because the car was fantastic! I had a nice fight with Magnussen and the pace was really good. I saw unfortunately both Red Bull cars had to stop, then after Raikkonen retired the team told me we had the opportunity to finish P4, so I gave everything to the end. The car has been fantastic since the beginning of the weekend, today I could just push flat out and the pace was great because I managed to pull away from the Haas. I need a bit of time to let this sink in, but we will definitely enjoy it with the team tonight! The start of the race was mega - I managed to overtake Ricciardo in Turn 1 which was great, after that it got a bit tricky when Magnussen overtook me in Turn 1, I knew I had to overtake him straight back because I would lose time and it would be difficult to catch him afterwards. Once I passed, I managed to keep him behind and push flat out while I was trying to manage the tyres, which we did pretty well. I think the pace was great so I'm just super happy."

Brendon Hartley: "An amazing day for Toro Rosso but a disappointing day for me. I had a good start and first couple of corners but had a small contact with Perez in Turn 4. This not only damaged my front wing for the remainder of the race but I was also given a 10 second time penalty. We had the pace to be comfortably in the points without the penalty so it was a bit frustrating. A big thanks to all at Toro Rosso and at Honda, it has been an amazing turn around since Melbourne which bodes well for the next few races."

Franz Tost (Team Principal): "Fourth place is a fantastic result for Honda and for Toro Rosso. We arrived in Bahrain with a new aero package and also Honda came with some modifications, and from the beginning onwards on Pierre's car - where we fitted the upgrades - we saw that we improved the performance in comparison to Melbourne. On Friday we had both cars on different setups - Pierre was with the new specifications while Brendon was on the previous version - but after a few runs we realised the new upgrades worked as expected and as calculated from CFD and the wind tunnel. On Saturday both cars were identical. Pierre had a very good qualifying by finishing sixth, which meant he could start from fifth position because Hamilton got a 5-place grid penalty after a gearbox change. Also Brendon showed good performance and finished in 11th place, just one-tenth of a second behind Q3. The start of the race from both drivers was quite good. Pierre defended his position and came back from the first lap in fourth, he then fought against Magnussen in a very good way and kept his position until the end of the race. I must say, that he controlled the speed by managing the tyres and the fuel in a very professional way. Brendon unfortunately touched Perez after the start, therefore he got a 10-second penalty when he did his first pitstop. Therefore, he couldn't finish in eighth or ninth position. Brendon did a good job in the race because it wasn't easy for him to catch up as he spent a lot of time in traffic. We decided to call him in for another pitstop for supersofts and he managed to close the gap - he would have probably needed another four or five laps to achieve 10th position. Generally speaking, we are very happy with this result. To finish in fourth position in the second race of the year is really a very positive sign from Honda and from Red Bull Toro Rosso side. I'm quite confident that we have what we need to keep this level of performance – maybe not finishing fourth all the time because we mustn't forget that Verstappen and Ricciardo didn't finish the race – but nevertheless I'm convinced that points are possible in all of the races. I want to thank the Research & Development department of Honda in Sakura, they did a fantastic job during the winter months significantly improving the performance, as well as the reliability, and the result is that we are now fighting for front positions. Thank you also to the aero department in Bicester, they really did a good job because all of the upgrades worked as expected. Congratulations to Honda and the team for the great job.

Toyoharu Tanabe (Honda F1 Technical Director): "It was a very exciting race and it is satisfying to have seen both our cars perform well to take the chequered flag. Special congratulations must go to Pierre who drove brilliantly all weekend to finish 4th, to give Honda it's highest finish since we returned to Formula 1 in 2015. Brendon drove very well to fight back from a 10 second penalty, but unfortunately it was enough to drop him out of the points.

"In the two weeks since our difficulties at the Australian Grand Prix, everyone in the team, at the track and back in the UK and Japan, has worked very hard and this nice result is a well-deserved reward for all our efforts. We feel we have made some progress, improving our reliability and it is also clear that the aero updates introduced here worked really well. We can enjoy this moment for a few hours, but as from tomorrow, it's time to focus on the next round in Shanghai."