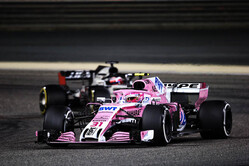 Sahara Force India scored its first point of the season tonight as Esteban Ocon raced to tenth place under the lights of the Bahrain Grand Prix while Sergio Perez ended the day in P12.

Esteban Ocon: "It was a very tough race and there was never really a chance to catch my breath. I was always pushing, always fighting, always chasing. We are right in the middle of the midfield fight and it was a nice reward to overtake Carlos [Sainz] with just two laps to go and score the final point. I'm a bit disappointed that we didn't get more from this race, especially starting from eighth place, but we did the best we could in the circumstances. The main positive to take from this weekend is the improvement we made compared to Melbourne. We need to keep working in the same direction to find more performance in China next week."

Sergio Perez: "It feels like an opportunity lost because my race was effectively over on lap one. We knew how important it was to stay out of trouble, but there was nothing I could do to avoid what happened. I made a pretty good start, but Brendon [Hartley] lost control of his car and spun me around. I had a lot of damage to the floor and that cost me performance for the rest of the race. Despite that, I nearly made it back into the points, but in the end there was no chance to do it. We can look at some positives: it was a fun race, with lots of battles and we are making progress with the car. I hope we can continue the good work and be quicker in China, where we will hopefully get more performance from our package."

Otmar Szafnauer: "We had to work very hard to score the final point tonight. Esteban did an excellent job of chasing down Sainz in the final few laps and put significant pressure on him to overtake him and move back into the top ten. It was marginal as to whether it would be a one or a two stop race, but I think we called it about right with both cars. Sergio's race was compromised heavily by the contact with Hartley on the opening lap where we were simply the innocent victim. There was big contact, which damaged the floor quite significantly and impacted performance. The spin dropped him to the back of the field and a slow puncture forced him to pit early and adopt a two-stop strategy. To recover to P12 was a tremendous effort in the circumstances."