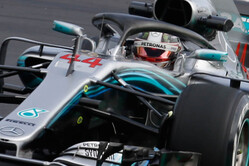 Ever since that lap in Melbourne, there has been a difference of opinion at Mercedes over the German manufacturer's so-called party mode.

While Lewis Hamilton was denying its existence in Melbourne, team boss Toto Wolff was saying the exact opposite, the German team even explaining engine modes and how they work in its build up to this weekend's race.

Nonetheless, following a performance which saw Ferrari lock-out the front row in Bahrain, Hamilton pointed to the SF71-H's superiority as vindication of his previous claim that there is no 'party mode'.

"I guess it ultimately proves everyone who said we had a 'party mode' in the last race wrong," he told Channel 4.

"Ferrari have done a great job this weekend," he added, "they've got the pace and it's been a difficult weekend for me overall in general."

Asked where the pace has gone since Melbourne, where his qualifying lap was 0.6s better than anything Ferrari could manage, the Briton said: "I think that was a really good lap from me and while I tried to get the same again here it's not something you can always do.

"I think we come to a hotter circuit and often the gap closes a little bit because the Ferrari's maybe have an upgrade, their engine mode (festa mode? – Ed) is easily as good as ours.

"As you could see on the straights they are just as quick if not quicker," he added. "When you get to a hot circuit it's really difficult to keep the temperatures low in the tyres and that's something they've always been good at."