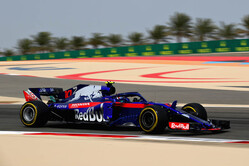 Pierre Gasly: "Today was a very productive Friday for us, it felt very comfortable in the car since the first lap in FP1. We showed some decent pace in both sessions with a 7th and 8th best time. It's a good beginning but there are still things we can improve for tomorrow because it's really tight between everyone, so I need to spend a lot of time tonight analysing everything we tested today. The first feeling with the car is really positive, so hopefully we can keep it and have a similar day tomorrow."

Brendon Hartley: "It was a pretty productive day for the team today; Pierre and I ran very different setups across the cars as we had new bits to test and this was very useful because Pierre looked very quick for the whole day. Unfortunately, I didn't do a representative lap on the supersofts in the afternoon, but we gathered some really important information on the long runs. We definitely seem a lot more competitive than in Melbourne and it looks positive for tomorrow."

Jonathan Eddolls (Chief Race Engineer): "Today was a very productive and successful day for the team as a whole, a bit more so on Pierre's side of the garage than Brendon's. We came to this event with quite a few new aero components - actually a new package - that we fitted to Pierre's car for today, while Brendon was on the old Melbourne one for today's sessions. The new package appears to be working very well - we can see a difference between them so that's positive - the aero guys have done a good job! We've also spent a lot of today working on optimising the setup around the aero package based on what we saw in Melbourne as well. After the last race the engineers across the two factories in Bicester and Faenza spent an awful lot of time analysing everything and trying to come up with some new setup directions which we've tested successfully here today. We have some good direction now which hopefully we can carry into tomorrow. There's a bit of work to do on Brendon's car - he will get the same new aero package tomorrow - so he will take a step with that and take on the learnings that we have from today. Another positive as well is that in the long runs the tyre degradation looked good on our car - maybe a bit lower than other competitors - so overall a good start to the weekend."

Toyoharu Tanabe (Honda F1 Technical Director): "Two weeks on from Melbourne, here in Bahrain we are racing at a more representative race track. The Sakhir track no longer presents the really tough challenge for the PU, because running qualifying and the race at night means temperatures are much lower than in the past, when it was a daytime race. However, it still presents an interesting exercise for the engineers, as FP2 provides a more accurate assessment of the conditions to be encountered on Saturday and Sunday and so was the best session for working on engine settings for the rest of the weekend. The normal Friday programme went smoothly and it was a productive day overall for the team."